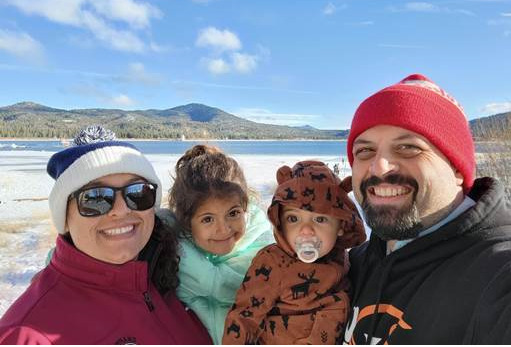 From her family’s smiling faces, it’s hard to imagine that just months before this photo was taken, Katy Cohen (pictured above on the left) was ​in and out of the hospital and even placed in a medically induced coma​ because of a condition that was causing her to rapidly decline.

Katy’s youngest child was born at Hoag in November of 2020. In August of 2021, less than a year after giving birth and with no prior history of epilepsy, Katy began experiencing uncontrollable seizures, mood swings and cognitive issues, which completely changed her from the person her family knows and loves. “We were really scared and Katy’s condition was worsening,” said her husband, Adam.

Fortunately, Katy came under the care of Dr. James D. Park, an ​epileptologist in the Epilepsy Program in Hoag’s Pickup Family Neurosciences Institute. Hoag is home to a nationally recognized Level 4 Epilepsy Center. Dr. Park quickly recognized Katy was suffering from an autoimmune epilepsy that was triggering a severe acute reaction in her brain. He began treatment while an extensive workup was being conducted.

A full-body scan found what was thought to be a benign cyst on one of Katy’s ovaries, which would normally have been left alone. However, due to the Hoag epilepsy team’s extensive experience and multidisciplinary approach, it was suspected that the ovarian mass could be triggering Katy’s autoimmune epilepsy.  A decision was made to remove the ovary, which ended up having a tumor called a teratoma.

With immunotherapy and removal of the mass, Katy’s symptoms improved quickly. In fact, she’s now been seizure-free for months and is back to work, having fun with her family and being her usual happy self.

“It was really a strange and frightening experience, and my family and I couldn’t be more thankful to Dr. Park and the team at Hoag for guiding us through it,” said Katy. “I’ve always had a pretty upbeat attitude, but this experience has made me even more appreciative for all the blessings I have and for each and every day.”