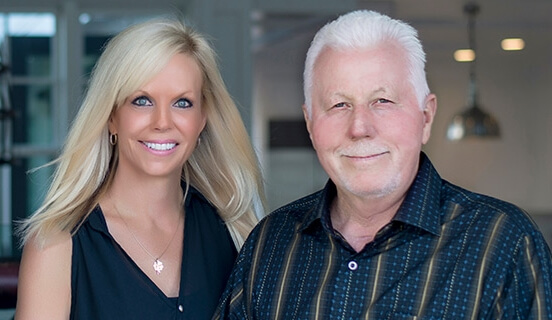 Twice during Mark Holechek’s 25-day hospital stay his adult children were called in from out of state to say their final goodbyes. A brain aneurysm rupture had caused his heart and lungs to shut down. Doctors could not yet assess if he had suffered brain damage, as he had spent weeks in a medication-induced coma, and he simply couldn’t breathe.

Thankfully, the kids’ trips home were unnecessary. When Mark was rushed to the hospital from his Corona del Mar home on April 13, 2012, he was taken to Hoag. And that, Mark’s wife, Cindy, says now, is why he is sitting next to her, listening to her recount his harrowing story.

“I have no doubt that if we had landed at any other hospital, Mark wouldn’t have made it,” Cindy says. “It sounds corny, but Hoag is special.”

Hoag is also home to some of the most experienced neurologists, cardiologists and pulmonologists in the region – three specialties that Mark’s highly unusual case required.

When he was first admitted to the hospital, Mark was a cardiac patient. After stabilizing his heart, doctors placed him on the Arctic Sun© cooling protocol, a therapeutic hypothermia that helps preserve brain and vital organ function after the body has experienced a loss of oxygen.

“Hoag is so amazing that they have the ability to do these things,” Cindy says, as her husband listens. “Mark doesn’t share the story because, as he explains, ‘I wasn’t really there.’”

During the bulk of the 25-day ordeal, Mark was kept heavily sedated as specialists from across the hospital worked together to unravel his mysterious case and save his fragile life. A close family friend of the Holechek’s, gynecologic oncologic John (Jeb) Brown, M.D., even got involved and spent a great deal of time checking on the family and offering support.

Once Mark’s heart was stabilized, a CT scan revealed the aneurysm that had caused all this mayhem.

“That’s something you never want to hear,” Cindy says. “I looked it up, and you read all these statistics that your chances of survival are 30 percent.”

Many hospitals rely on open brain surgery to repair an aneurysm, but the Hoag Neurosciences Institute offers state-of-the-art facilities and highly trained interventional neuroradiologists who were able to perform a coil embolization, the intricate procedure that eliminates the need for traditional invasive and potentially debilitating brain surgery.

A catheter was gently guided through an artery in Mark’s groin all the way up to his brain. When the catheter reached the weakened vessel, a fine filament was released to pack up the rupture from the inside. The surgery went well, but after an aneurysm it is common for the blood vessels in a person’s brain to narrow erratically, a condition known as vasospasm. Vasospasms were limiting blood flow to Mark’s brain cells, and two days after his first brain surgery, Mark needed a balloon angioplasty.

Dr. Nguyen performed the procedure, in which blood vessels are mechanically widened.

“The doctors were amazing, and we got through that. But then they said, ‘Now, it’s his lungs,’” Cindy says.

The aneurysm rupture had caused both his heart and lungs to shut down. And so much fluid had filled his lungs, he was drowning. Fortunately, Hoag is one of the only hospitals in the area with a special Rotation Bed that flips patients 180 degrees to take the pressure off the lungs and help remove the fluid.

At that point, Cindy was optimistic enough to send her children back home. But then two days later Mark experienced another terrible vasospasm, and was rushed in for another angioplasty.

“The doctors said, ‘You need to call your daughters back. I want this to be a false alarm, but it’s serious,’” Cindy says.

Thankfully, the procedure worked. Mark was stabilized, and instead of saying goodbye to their father, Mark and Cindy’s children were able to say hello.

In fact, five days later Mark’s daughter Nicole was at his side when the 63-year-old restaurant owner came out of his medically induced coma. Two weeks had passed since his aneurysm.

“He was peaceful. His face was relaxed and he was looking around,” Cindy says. “He still couldn’t speak because he had a tracheotomy.”

He also still couldn’t breathe on his own, but after a few weeks in a sub-ICU, Mark was able to leave Hoag and begin the process of weaning off the ventilator, and going through physical therapy to relearn how to swallow, walk and talk.

Mark had lost 25 days of his life and nearly as many pounds. All of his muscles had atrophied, but he was alive. And, thanks to Hoag’s skillful, resourceful team, he hadn’t suffered any significant brain damage.

A motivated patient, Mark finished his physical therapy and got back to his passion of remodeling homes. A year after his ordeal, the couple remodeled a vacation home in Arizona. And recently, they built a new home for themselves from the ground up on the Balboa Peninsula.

“We chose the location because we wanted to be closer to Hoag,” Cindy says. “From the back deck, you can see the hospital.”

It’s a view that gives them comfort.

“It’s funny, we were sitting on the deck of the third floor, and I said, ‘Look, over there. It’s my old house,’ and it was Hoag,” Mark says. “I drive by the hospital every day, and I just feel so lucky. It is amazing.”