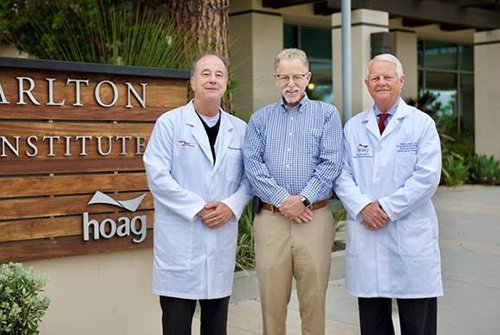 Some might question why David Smith considers himself lucky. A Vietnam vet who had been exposed to the carcinogen Agent Orange, David battled Hodgkin’s lymphoma with treatments that likely exacerbated his hereditary heart condition. A diagnosis of hemolytic anemia a few years later ensured that, should he ever need major surgery, the results could be disastrous.

So, 10 years ago, when the medical team at Hoag told him he needed to replace a weakened heart valve, David’s response was surprising.

“I think there has been so much good fortune, so much luck,” he said.

David was the sixth person at Hoag to receive a new aortic valve through what was at the time a newly FDA approved alternative to open heart surgery. The procedure was transcatheter aortic valve replacement (TAVR), a surgical technique that involves delivering a collapsible artificial valve into the heart through a catheter inserted up to the heart through the groin or chest. Hoag became the first in Orange County to offer this innovative procedure.

David was only 61 at the time of his procedure.

“When I’d come into the pre-op arena, the staff would say, ‘What you are doing here? You’re too young,” David said.

Today, Hoag is a leader in TAVR, having recently completed its 500th procedure. But at the time, TAVR was a brand new offering, and the team was still learning. Still, David was confident.

“I have the philosophy that I bring the problem to the smart guys, and they deal with it,” David said.

Those “smart guys” included what David referred to as a “dream team” of cardiologists, surgeons, nurses and technicians who addressed his heart condition before he even started feeling symptoms. His cardiologist, Richard Haskell, M.D., and surgeon, Aidan A. Raney, M.D., co-director of cardiovascular surgery at Hoag and the James and Pamela Muzzy Endowed Chair in Cardiovascular Surgery, performed the TAVR procedure. From the outset, he trusted that he was in good hands.

“Hoag has always been a place I felt confident in,” David said. “It is leading-edge in terms of their facility and their specialists. This is not a university medical center, but it has built a reputation around its quality and innovative care.”

David noted that philanthropic community support translates to state-of-the-art procedures, equipment and clinical trials, giving patients access to some of the nation’s most innovative care.

“Hoag is the best. I’ve spent more time in that hospital than I’ve wanted to, between the hemolytic anemia, blood transfusions, plasmapheresis,” David said. “All the people I have worked with, the staff, the technical professionals. They have all been phenomenal.”

It has been nearly seven years since David received his new heart valve, and more hospitals are beginning to offer the surgical alternative to both high-risk and low-risk patients. But TAVR is still not common at most hospitals.

“Another close friend has had other valve issues and underwent a replacement at a different hospital. The time and the trauma in just healing from open heart surgery is crazy compared to what I experienced,” David said. “After my surgery, within a week, maybe a week and a half, I was back at work.”

“TAVR was never a name or process that I knew going into this,” he said. “I really feel like it was a lucky break for me, especially with Hoag by my side.”