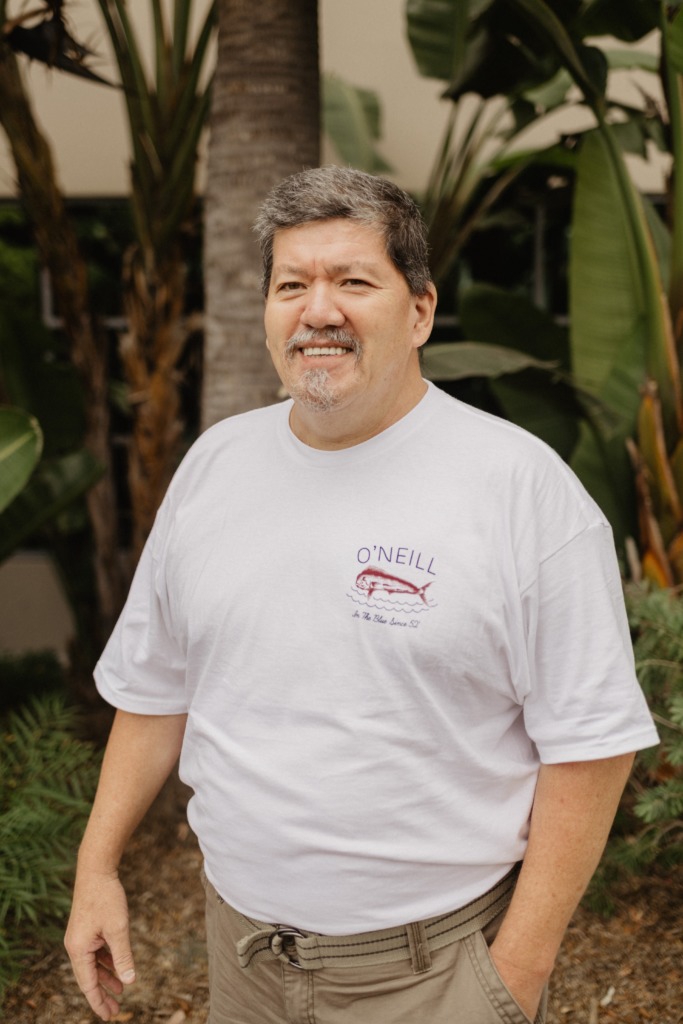 Robert Fulkerson had worked in health care for more than 30 years, so, as he puts it, “I know good health care instantly, when I see it.”

He also knows good nurses, good hospitals and good medical teams. But nothing he has seen in three decades of working as a scrub nurse and an orthopedic implant and trauma rep prepared him for his experience as a cardiac patient at Hoag during the COVID-19 pandemic.

Robert suffered his first heart attack on Super Bowl Sunday in 2019. He received care at a different hospital, where cardiologists stented what was then a 95% blocked left anterior descending artery, a cardiac issue so severe it is also known as a “widow maker.”

Seven weeks later, he suffered a massive stroke and another heart attack. He didn’t wake up for seven days. And when he came to, he was so disoriented, he didn’t recognize his sons.

Forced by his medical situation to stop working, Robert spent more than eight harrowing months without insurance. When his wife’s insurance plan kicked in on January 1, 2020, he sought care at Hoag.

Known for their innovative and comprehensive cardiac care, Robert knew Hoag’s Jeffrey M. Carlton Heart & Vascular Institute was where he needed to be.

Robert was told he needed another procedure.

“Nobody wants to be the hospital right now. Just going to work, the nurses and the staff, they’re risking their lives. It’s scary. But, when I checked in, everyone was so super nice,” he said. “Everyone, from the guy out front parking the cars, to the nurses, everyone looked me in the eyes, and said, ‘Hello,’” he said. “I can’t tell you how much that means to me. We’re all humans.”

Robert was especially moved when the cath lab nurse Cyndi stopped by repeatedly before his procedure, to make sure he was comfortable and that he had everything he needed. These small gestures added up for Robert, who had worked in hospitals during other medical scares, including the early, confusing days of the HIV epidemic.

“Nothing compares to the scare of the coronavirus,” he said. “So, for people to just show up and do their jobs and be professional, but not just professional, really caring and human, it was pretty amazing.”

Robert’s procedure went smoothly, correcting his sick sinus syndrome, a very serious condition which causes irregular heart rhythms. A cardioverter-defibrillator was implanted into his chest that can save his life by monitoring his heart and sending small electrical pulses to correct irregular rhythms.

“I thought my stents were clogged. I didn’t know my heart was worse,” he said. “I woke up in the recovery room, and I found out I got a cardiac defibrillator put in, and I just broke down, crying. I was the last person in the department, and Cyndi just pulled up a chair and held my hand. It was probably the end of her shift, but she said, ‘I can sit with you for a while. I am not going to leave you.’

“There are no words that can describe how much that meant to me.”

After a while, Robert was well enough to be transferred to the general recovery area, where he encountered another nurse, Vivian, who also sat with him and held his hand.

“Because of COVID and the precautions in place to keep everyone safe and healthy, I wasn’t able to have my wife there with me, my daughter, my sons, my grandkids. You can’t be any more vulnerable than that,” he said. “To have the staff there, like my surrogate family, they were there, and they cared. That’s what made my whole experience so remarkable, so outstanding.”

In a thank you note to staff, Robert wrote, “When I fully recover, and COVID fears subside, I will return … to offer up my – no pun intended – heartfelt thanks and appreciations for a tremendous staff. In the meantime, if possible, please give my deepest thanks and warmest hugs for an unbelievable staff that works for us, the patients.”