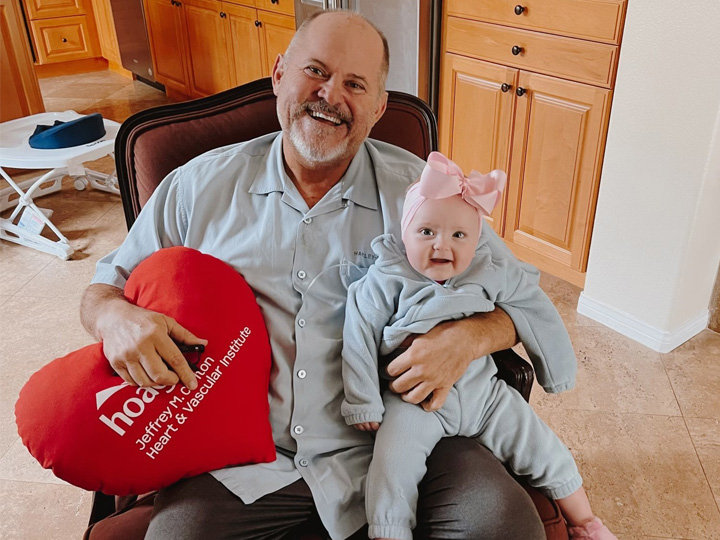 Dan Ryan is a competitive person with an abiding appreciation for sports. So, when he refers to Anthony Caffarelli, M.D., as the “Tom Brady” of heart surgeons, the analogy commands attention.

“It is pretty cool that you’re excited that the guy is going to give you a quintuple bypass,” said Dan, 59, who recently underwent open-heart surgery to correct an anomalous right coronary artery (RCA). “He made me feel like I’m not a patient, I’m part of the team.”

That team consisted of Dr. Caffarelli, Dan’s cardiologists, nurses, anesthesiologists, cardiac rehabilitation specialists as well as Dan’s wife, Elizabeth, their four children and baby granddaughter, who continues to serve as his inspiration in recovery.

The reason the “Tom Brady” of heart surgeons performed a quintuple bypass on Dan was to correct what was likely a birth defect and to fix the major coronary artery disease in all of his major arteries. Quintuple bypass is the most intricate heart bypass surgery and includes all five of the major arteries feeding the heart. When left untreated, coronary artery disease can lead to serious problems such as chest pain, muscle damage and heart attack.

Though heart problems run in the family, Dan’s condition had never caused him any issues and went undiagnosed. In fact, the fit and active Dan said that three months before his surgery he swam a 10K in the ocean.

A burning sensation in his lungs after a workout lead Dan to seek medical attention. Dan was floored when he heard the recommendation.

“They said I needed a bypass. At that point, I feel good, I’m eating right, I’m swimming two miles a day, and they’re telling me I am messed up,” he said.

The more research he did, the more Dan was convinced that he needed to correct the problem right away and team up with the best surgeon to address his condition.

“I talked to a lot of influential people in Orange County, and it was instantly clear that Dr. Caffarelli was the guy to go to,” he said.

Given Dr. Caffarelli’s renown, Dan did not hold out hope for an appointment. To his surprise, Hoag’s team was as accessible and warm as it was world class. Dr. Caffarelli met with Dan and Elizabeth for more than an hour, explaining every detail of the procedure he recommended, including Dan’s options and the post-operative plan.

“If you ever need a calming influence before getting your chest cracked open, he is it,” he said. “I felt like I was in a half-time meeting, and we’re down by 28. Dr. Caffarelli comes in and says, ‘This is how we’re going to win this game.’ It was just an unbelievable meeting.”

“We went through the whole process. It felt like we were prepping for game time with everyone knowing their role, from the people in pre-op all the way through what’s going to happen when my wife gets into the waiting room,” he said. “We knew everything that was going happen.”

Dan has a kind word to say about everyone at Hoag, from the physicians to the nurses to the staff. Each person seemed invested in his care and personal wellbeing.

“The last thing I remember before I woke up from the surgery was the anesthesiologist saying to me, ‘Think about what you’re fighting for,’” he said. “That was easy, I just got my first grandbaby.”

With his granddaughter as his inspiration, the new granddad said that he met every recovery goal his physicians and rehabilitation specialists set out for him. In the first day, he sat up in a chair. The next day, he walked eight laps around the hospital floor. By four weeks, he was working four to six hours a day. By seven weeks, he was walking for four miles daily.

Now Dan is eyeing the ocean, ready to jump back in. But he still needs some time to let his chest fully heal. As he regains his strength, he says he is filled with gratitude for his wife’s love, his family’s support and the incredible care he received at Hoag.

“My dad died at 47 of heart disease. My brother had three heart attacks by the age of 60,” he said. “But exercise and commitment along with Dr. Caffarelli gave me a second chance. He made me feel as though we are all going to do this together. I tried to continue with that mindset through my rehab. I’m not going to waste what I’ve been given.”