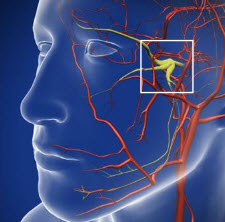 Often called tic douloureaux (French for “painful tic”), TN or TGN is an excruciatingly painful condition that affects one side of the face in the divisions of the fifth cranial (trigeminal) nerve. 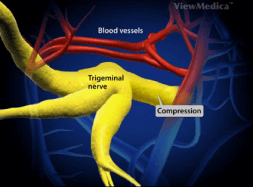 This chronic condition is caused by a misfiring of the trigeminal nerve. An attack causes brief episodes of extreme, shooting pain. TGN most commonly affects older people.

TGN is characterized by one-sided, short-lasting episodes of intense, stabbing, electric shock-like pain in the areas of the face where the three branches of the nerve are distributed (i.e., in the lips, eyes, nose, forehead, and the jaw). The pain is also commonly felt in the mouth mimicking toothache, often misleading clinicians to recommend irreversible dental treatments such as root canal therapy and extractions that do not address the source of the problem. The pain can be spontaneous or triggered by light touch, eating, chewing, talking, shaving, washing the face, or a breeze against the face.

Initially, the disorder may present with less intense, longer-lasting, dull ache (easily confused with TMJ disorders) or mild to moderate burning pain with occasional superimposed stabs of electric-like pain. Pain triggers may or may not be present in this early state of the disease sometimes referred to as “pre-trigeminal neuralgia.”

The primary cause of TGN is damage to the protective covering of the nerve fibers in the brain stem, usually due to an artery pressing against the nerve. The average age of onset is typically between 40-70 years. Other causes of TGN include diseases that also damage the covering layer around the trigeminal nerve fibers, such as brain tumors or multiple sclerosis (MS), especially seen in younger patients. 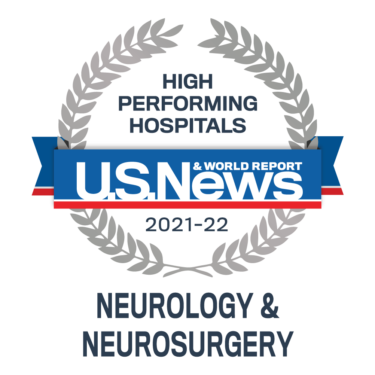 Before any treatment is rendered, a definitive diagnosis must be made by a specialist with focused expertise in facial pain conditions. Initial treatment of TGN is usually by means of anti-epileptic drugs. Other classes of medications, including anti-depressants may be used in some cases. Should medical management be ineffective or produce undesirable side effects, neurosurgical procedures are available to treat TGN.

Since there are several modes of surgical and non-surgical interventions available, each patient will be evaluated individually based on health status and severity of the disease. Treatment options range from nerve blocks/injections, percutaneous surgery (through the skin), brain surgery, and focused gamma radiation treatment. Each procedure has certain advantages and disadvantages: ease of the procedure, effectiveness, long-term results, recurrences, complications, etc. All factors will be considered carefully and discussed thoroughly with the patient, so an informed decision can be made. There is no one medical or surgical treatment that is effective in all patients.