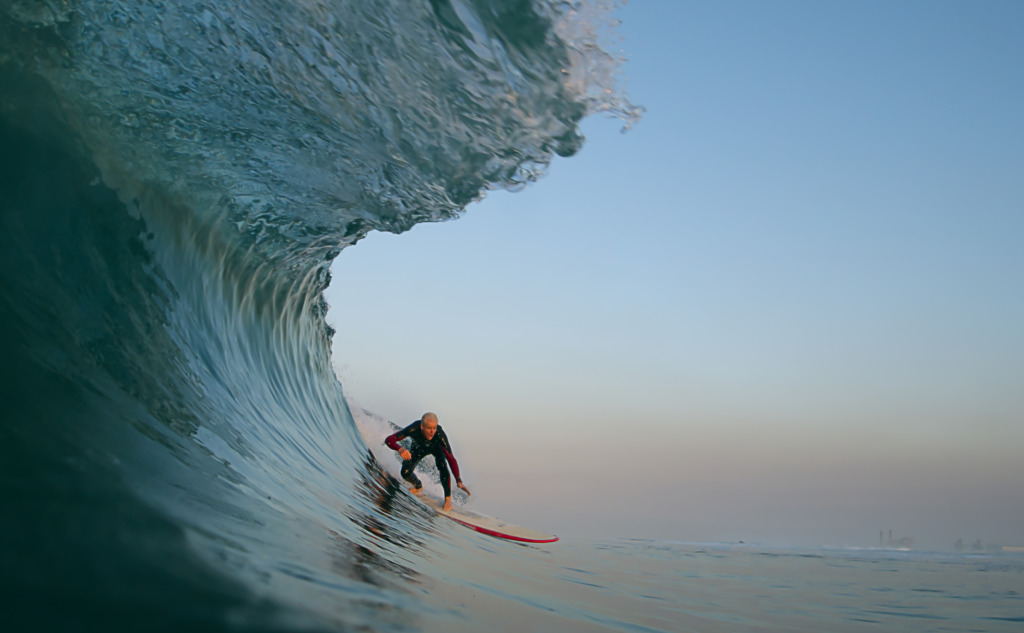 “The things that we do, those things come to define us, at least to ourselves,” said Eric Noble, speaking after the five-year anniversary of his life-altering back surgery at the Pickup Family Neurosciences Institute at Hoag.

An athletic person his whole life, Eric said that being active is an integral part of his identity. So is fatherhood. In fact, since becoming a father 19 years ago, Eric has mixed those two aspects of his identity – surfing with his two sons, running wind sprints with them to keep them conditioned for soccer.

Then, one day, a back injury he suffered in college took its final toll on his lower lumbar disc. After a lifetime of staying active while staying careful to avoid re-aggravating his injured disc, Eric pulled up in his driveway and couldn’t get out of the car.

“I’m by no means a world-class athlete, but for me part of my identity has always been athletic pursuits. That was taken away from me suddenly, when I was in the middle of raising my boys,” he said. “They were 9 and 13, and I was spending lots of time with them, surfing together 200 to 230 days a year. As a father, that was immeasurably important shared time. So, when that was removed, not only was I in pain, but I couldn’t be with my boys in the water.”

Eric did extensive research, combing through medical journals and seeking out surgeons who could help. Only Burak Ozgur, M.D., Chief of Service for the Neurosurgical Spine Program at Pickup Family Neurosciences Institute at Hoag, made him feel listened to. He asked Eric about his lifestyle, about his fears and his goals.

“It was clear that he was in it to serve people, and that was really important to me,” Eric said. “I felt like this is someone who cared about others and was going to take every case, including mine, at an individual personal level.”

“Usually it seems like the chiropractic and the traditional medical communities are at odds with each other, so it was strange that a neurosurgeon was referring me to a chiropractor, but he wanted to know more about me as an athlete,” Eric said. “Dr. Wardenburg explained that they were going to work together to do a process of elimination.”

While Eric’s disc was clearly collapsed, a collapsed disc is not always the source of pain. Before recommending back surgery, Dr. Ozgur advocates for patients to find out if surgery is really the solution.

After six months of testing, it became clear that Eric would benefit from surgery, after all. Dr. Ozgur not only performed a lateral interbody fusion, but he agreed to perform the procedure without inserting any metal rods or pins to help secure the spine, relying on natural bone fusion – a less invasive technique that Eric specifically wanted. This meant Eric would have to be extra careful during his recovery and that his healing period may take longer, but Eric wanted to avoid hardware that might limit his mobility in the long run.

It was a decision that required a deep two-way trust. Eric trusted Dr. Ozgur’s expertise and Dr. Ozgur trusted that Eric would put in the hard work of physical therapy and healing.

“It was hard, because immediately after the surgery I felt so much better, but I had to be careful for a year until the spine fused,” he said. “So, in 2016, after a year of recovery and physical therapy, I was able to get back on a board and to continue learning surfing.”

Emphasis on the word “learning.”

“The irony is, by the time I did get back out with my sons, both my boys rip, and I’m left behind,” he says. “But that’s what you want. You want them to surpass you.”

Every day on the water with his sons, Eric said he feels immeasurable gratitude. On the five-year anniversary of his back surgery, he sent a photo of himself surfing along with a note of thanks to Drs. Ozgur and Wardenburg.

“It’s now five years post-fusion for me, and every time I paddle into the surf with my sons, I’m grateful to you both and to your staff members,” he wrote. “Your extraordinary expertise in combined diagnosis, pre-surgical physical therapy, surgery, physical therapy, and empathetic caring has given me a second life – one I never take for granted, even after half a decade. My back is 99% perfect, well ahead of just about any 55-year-old, spine fusion or not!”

In Hoag, Eric found a surgeon and a medical team who were willing to define him as he defined himself – as an athlete and a father.

“Any of us in life can feel like we’ve either earned our own successes or that we’ve had good luck. Either one doesn’t acknowledge the fact that we’ve had help from people along the way,” he said. “Hoag, as an environment, the warmth of the staff, the people, really exemplifies that. That whole experience was just amazing. I was treated as an individual the whole way.”