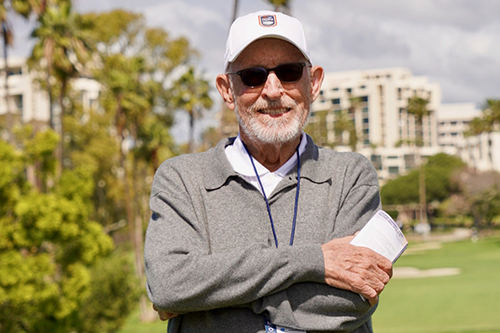 Tom Johnson, publisher of Stu News Newport, has long been a supporter of Hoag. He has twice chaired the 552 Club, a community-based group of volunteers and donors. He serves on a philanthropic committee that supports Hoag nurses. And he has been a supporter of the Hoag Classic practically since the PGA-TOUR golf tournament first arrived in Newport Beach.

So, when Tom needed open heart surgery to replace his mitral valve, there was no question where he was going to go.

“Hoag is an extraordinary place. Their doctors are the best in the business, and their programs are nationally renowned,” he said. “We are fortunate in the community of Newport Beach that we have a world-class health facility as our local hospital. That’s important for people to understand. It’s just down the street, but the services they offer are second-to-none.”

More than most patients, Tom knows all the accolades and statistics. Hoag’s Jeffrey M. Carlton Heart & Vascular Institute has been named one of the 50 Top Cardiovascular Hospitals in the nation by IBM Watson Health three years in a row. Becker Hospital Review named it one of the 100 hospitals and health systems with great heart programs. And the Society of Thoracic Surgeons ranked Hoag’s cardiovascular surgery program in the highest category for quality and successful outcomes, a feat achieved by only 10 percent of hospitals in the nation. Tom has printed all those rankings in his paper over the years.

But when it comes to putting on a hospital gown and climbing onto a gurney, those numbers really have to add up to something. When he met with Aidan A. Raney, M.D. to discuss the operation, Tom knew he was going to receive the level of world-class care that he’d been hearing about and writing about for years.

“I get scared just getting a shot, so I wasn’t excited to have my chest cracked open,” he said. “I remember going in the morning of my surgery and not experiencing any angst. I felt like I was in the best possible hands, and that everything was going to turn out the right way because of Dr. Raney and Hoag Hospital.”

Tom said Dr. Raney performed a thorough, expert job of replacing the mitral valve, and that the nursing staff stayed on top of his pain afterward. They also got him up and walking soon after surgery to aid his recovery.

“Dr. Raney is the top heart surgeon there is. I was very lucky to get him, and the nursing staff was unbelievable afterwards in their care,” he said. “They make sure that you don’t just lie down and stay in bed. They get you up and walking down the hallways. All that stuff goes to making your recovery so much quicker and better. And you’re stronger when you come out of the hospital because of what the nurses and the staff do.”

A week later, when Tom left the hospital, Hoag’s expert care followed him.

“Hoag set me up with their cardiac rehabilitation clinic three days a week,” Tom said. “They tailor made a program for me and my needs, which got me active and feeling a lot better.”

Recovery from open heart surgery is not easy, but the expert care he received at the rehab clinic brought Tom “all the way back to where I was.” During his recovery, Tom said that Dr. Raney would take the time to call and check up on him.

“That’s the thing that set him apart for me,” Tom said. “I have no relationship to him, it’s not like I’m some favored person. It’s just part of his follow-up care, and it made me feel so special.”

That balance between world-class expertise and patient-centered approach is what Tom means when he tells his readers and his community that Hoag is the “best of the best.”

“You can hear about what other hospitals around the country are doing, but I would bet money that our community hospital – and I use the term lovingly – it’s second to none.”

Tom’s experience has deepened his appreciation for the hospital. So, it’s no surprise that this year he took to the green at the Newport Beach Country Club to announce the players at this year’s Hoag Classic.

“My heart was strong enough, that I was on the first tee.”