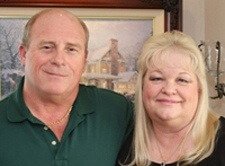 For about a year, Huntington Beach resident Janis Kirkpatrick, was experiencing irregular bleeding, so she decide to speak with a physician about it.

She was referred to Jonathan Wheeler, M.D., a Hoag-affiliated Obstetrician/Gynecologist who discovered that Janis had been through menopause, and that the spotting she was experiencing was post-menopausal.

“I didn’t even realize I had gone through menopause,” says Janis. “I experienced no symptoms to indicate menopause, and the spotting I had, I believed to be part of my regular menstrual cycle.”

Yet, even a little spotting after menopause is not normal, so Dr. Wheeler suggested they do an in-office hysteroscopy to determine the cause of the irregular bleeding. This revealed Janis had polyps, and a biopsy further discovered that they were precancerous.

Oftentimes, a patient with precancerous polyps has a greater risk for uterine cancer. While Dr. Wheeler is a skilled surgeon himself, he knew that Janis, given her condition, would be best cared for by a gynecologic oncologist, so he referred her to Lisa Abaid, M.D., a Hoag-affiliated Gynecologic Oncologist.

Robotic surgery was also an ideal option for Janis because of her weight. Women and men who are overweight, elderly, or who have limited mobility face an increased risk of complications after traditional open surgery, such as wound infections, blood clots, and pneumonia. Robotic surgery is particularly beneficial in this group of high-risk patients, because it avoids a long period of immobility, which then lowers the chances of developing a serious postoperative complication.

At the time of her robotic hysterectomy, it was discovered that Janis had had endometrial cancer, which occurs up to 40 percent of the time when precancerous polyps are detected. She stayed at Hoag that evening, and went home the next morning.

“I am so thankful for the care and expertise of Dr. Wheeler and Dr. Abaid,” exclaims Janis. “I had my surgery on October 22, and by October 31, I was up greeting the children on Halloween, passing out helium balloons! It was truly remarkable how easy and quick my recovery was!”.

Janis now receives additional preventative health measures to ensure that if the cancer returns that it is caught early, when most treatable.