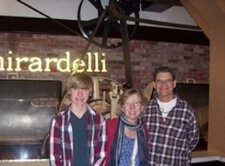 Steve Heins tried to cover up his symptoms of Lewy Body Disease, but his Eagle Scout son, Robert, was not about to let his father lose his mind.

Steve’s wife, Gincy, will never forget the day – her birthday, Oct. 11, 2009 – when 12-year-old Robert came home and revealed to his mother that dad could not remember the way home driving through the neighborhood streets.

“I didn’t think Robert had caught on that I had gotten lost on the way home (with two other adults sitting in the back of the car, after the group had been exploring possible Eagle Scout projects),” Steve said. “I tried to pretend I knew what I was doing, then I asked him, ‘What’s the best way to get home?’ I tried to make it seem as if nothing had happened, and I did the best I could to backpedal and cover things up. But my son ratted me out.”

While that day changed the Heins’ lives, it wasn’t the first time Steve had been questioned about losing track of time, forgetting a simple name or place, or displaying the inability to function with the most basic computer tasks, even though it was something he had been doing for several years at his job at the Happiest Place on Earth.

Steve, you see, had been a gifted designer and mechanical engineer, first for McDonnell Douglas, then Boeing, and then as a Planner for the Planning Department at Disneyland, where his fingerprints are everywhere on the rides and attractions. Steve had worked to make them better, safer and more enjoyable for the millions of worldwide visitors. “I have played a game of basketball inside the Matterhorn,” he said. “I’ve sat on top of Splash Mountain with a cup of coffee and watched the sun rise.”

Steve’s supervisor noticed that his employee was struggling to remember times, places and people, not ordinary behavior in such an intelligent person, and his boss began documenting Steve’s lapses in a notebook.

Steve’s boss apparently had a family member who suffered from a debilitating disease and he saw a problem in Steve. Steve kept trying to hide the warning signs, until he finally went to his doctor after the encounter with his son on his wife’s 49th birthday.

“I feel luckier than heck that he was there,” Steve said of his former boss. “One of the problems was that I wanted to ignore it and cover it up.”

The Heins, who live in Cypress, wanted a second opinion of Steve’sMild Cognitive Impairment (MCI) diagnosis and decided to visit Dr. William Shankle at Hoag Memorial Hospital Presbyterian in Newport Beach. Dr. Shankle is the Program Director for Memory and Cognitive Disorders at Hoag Neurosciences Institute. They selected Dr. Shankle because they heard other people in their support group speak highly of Dr. Shankle, and they decided to go see him for a second opinion. About half the couples in their support group, Gincy said, are patients of Dr. Shankle.

In February 2011, Dr. Shankle diagnosed Steve with Mild Cognitive Impairment possibly due to Lewy Body Disease, which “is a cross between Alzheimer’s Disease and Parkinson’s Disease,” Gincy said. But according to Steve, the disease has been stabilized since taking the prescribed medications, a dozen pills a day, including a multiple vitamin, and following all the instructions of the Orange County Vital Aging Program (OCVAP)​ at Hoag Neurosciences Institute.

At 58, he desires to live as much of his life as possible without Lewy Body Disease’s negative effects, and part of the plan includes taking classes and participating in activities that cause his brain to work in different ways. Steve signs up for classes at local community colleges in art, painting, sheet metal, auto body management and Spanish. He went fly fishing in Mammoth for five days to improve his hand-eye coordination.

“They say we only use 10 percent of our brain, so I say let me try to use another 10 percent of my brain that’s not damaged,” said Steve, who is fast becoming a Hoag model patient for dealing with the challenges of MCI. “I’m trying to do a lot of different things I’ve never done before to make new impressions on the brain. Maybe I can develop a part of the brain that I’m not using. So far, everything I’ve tried I’ve been successful at it.”

Since Steve’s success in helping to stabilize his Lewy Body Disease, his appointments with Dr. Shankle have been reduced to just once every four to six months, an improvement from once every four months.

Among other pro-active endeavors, Steve, who recently learned how to weld and manufacture barbecues, is signed up for painting, Spanish and acting classes.

“The painting class will cause me to learn how to paint, and I’ve never done that before,” Steve said. “And I’m taking an acting class, so I can learn how to act more normal, so people really can’t tell I have a problem.”

“I can only hope that I will be able to improve the outcome of these brain conditions,” said Dr. Shankle, a board certified neurologist, specializing in the diagnosis, treatment and management of Alzheimer’s Disease and Related Disorders (ADRD).

“Lewy Body Disease is similar to Parkinson’s Disease except that difficulties with thinking begin as early as the movement difficulties. In contrast, Alzheimer’s Disease does not show the slowing of movement, blank facial stare, shortening of stride, and loss of balance that is typical of Lewy Body and Parkinson’s Disease. In Lewy Body Disease, the brain lesions, called Lewy Bodies, accumulate first in the visual areas of the brain and in the brainstem. These lesions cause the earliest clinical changes, which include a marked fluctuation in the level of alertness or confusion during the day, slowing of movement, loss of balance, visual difficulties such as hallucinations, difficulty recognizing objects, faces or places, and greater difficulty with eye movements during reading, plus difficulties with complex task performance, such as cooking, shopping, driving, managing finances, doing mental calculations, managing a household, doing favorite pastimes. In contrast to Alzheimer’s Disease, memory is not as severely affected early on.”

Dr. Shankle co-founded the Alzheimer’s Research Clinic at University of California, Irvine, in 1987 and served as a clinical director for 10 years. Following that endeavor, he initiated a community based dementia program, the Shankle Clinic, in 1997 to deliver his medical knowledge and share his personal experiences as a caregiver to more patients and families.

“Of all dementing disorders, Lewy Body Disease produces the largest decrease in the neurotransmitter, acetylcholine, which is involved in many of the aforementioned skills and abilities,” Dr. Shankle said. “Because of this, increasing acetylcholine can produce significant improvements in cognition and function. The neurotransmitter, dopamine, is more variably affected. Sometimes, the use of Azilect or Mirapex or other dopamine agonists, will improve cognition and function. Unlike Alzheimer’s Disease, a treatment that delays progression has not been conclusively identified. However, it is worth trying Exelon to increase acetylcholine, Azilect and/or Mirapex to increase dopamine, plus daily physical exercise for 30 or more minutes, and continued brain exercise, particularly in the visual and executive function domains. Research may end up showing that this ‘cocktail’ approach can delay progression of Lewy Body Disease.”

“We also have a small series of Lewy Body Disease patients who have been treated with intravenous immunoglobulin who showed stabilization of their condition for years. This series of patients was not a double blind, placebo-controlled, randomized clinical trial, so it does not formally meet the most stringent criteria for demonstrating a disease delaying effect. However, I have not previously seen stabilization for years in Lewy Body Disease patients, so it is suggestive. Some basic science evidence supporting a disease-modifying effect is that the IgG antibodies in intravenous immunoglobulin therapy have been shown to bind to mis-folded proteins of alpha synuclein, which are hypothesized to be part of the cause of the progression of Lewy Body Disease.” By Richard Dunn