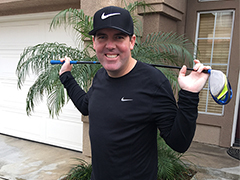 Technically, Bryce Hodding was the third patient neurologist and epileptologist David Millett, M.D., saw after he was recruited to Pickup Family Neurosciences Institute at Hoag in 2014 as the program director of Hoag’s Epilepsy Program. But according to Bryce, “Every time you go in there, he treats you like you’re his first patient and you are his only patient.”

Bryce, 33, experienced his first seizure in 2009, while working his dream job as a golf professional at Pebble Beach. As he remembers it, he was standing behind a counter at the resort one minute, and laying in hospital bed the next.

The following five years turned Bryce’s world upside down. He had to relearn how to walk and talk. He stopped working, stopped driving, moved back in with his parents in Huntington Beach and began a series of tests and procedures at leading academic institutions that would have minimal effect on his increasingly frequent and violent seizures. No one could determine the cause of the seizures or where in his brain they originated.

A high fever, likely related to his seizures, brought Bryce to Hoag’s emergency room one day in 2014. There, physicians told him about Dr. Millett, a respected epileptologist who was just starting a practice at Hoag.

“Dr. Millett is a rock star. From our first appointment, he went right to work. He knew everything about me, my vagus nerve stimulator, my medications, he got me scheduled for scans and different procedures to get me moving in the right direction,” Bryce said.

After a few years of managing Bryce’s seizures and monitoring his brain activity, Dr. Millett recommended a new device that was just approved by the FDA for epilepsy treatment, responsive neurostimulation (RNS). Similar to a defibrillator for the brain, the RNS device is implanted in a patient’s skull with electrodes placed directly on the brain to monitor for epileptic seizures. Then the device detects the electrical signature of a seizure, it delivers several bursts of electricity that can prevent or minimize seizures.

“Dr. Millett and myself and my family all talked about it to make sure it’s the right thing to do for my health,” Bryce said. “He makes sure you understand everything you are going through. If you don’t understand something, he’ll explain it to you until you understand. Even his assistants in the office, their communications skills are amazing. It is really wonderful there.”

After deliberating with his family, Bryce decided to undergo an RNS implant in June 2017. He said he noticed a difference immediately.

“It doesn’t stop every seizure, but my seizures are very reduced now,” Bryce said. “Instead of my seizures being an eight out of 10, they’re more like a three or four.”

Bryce does not expect the RNS to make him seizure-free, but for the first time in many years he has hope and is able to focus on the future. He recently started working at a country club in Huntington Beach, using Uber or getting rides with his mother, who also works there.

“I love to be around people and talk to people, so this is pretty awesome for me,” Bryce said. “Since I had the surgery, it’s helped me so much. I definitely can see myself driving sooner than I thought before.”

Bryce places the credit for his improvement with Dr. Millett and the team at Hoag.

“He’s so amazing because he takes chances. I’m that way too; I want to take chances because I want to get better faster, and that’s what he did,” Bryce said. “He has done so well and he has pushed the envelope to the point where I’ve gotten pretty dang good for right now.”