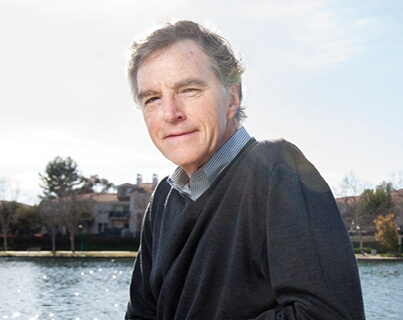 For Sam Wolgemuth the problem was perplexing.

After a day of clearing fallen trees on his vacation property in Wisconsin, Wolgemuth felt something he hadn’t ever felt before. His heart was pounding. It was uncomfortable, but not painful. It definitely wasn’t a heart attack, but then what was it?

Wolgemuth’s wife, a nurse, listened to his chest and advised him to call his Hoag cardiologist Mahnaz Behboodikhah, M.D. The doctor knew exactly what was wrong—Sam was experiencing atrial fibrillation, or afib.

Afib is a condition that causes the upper chambers of the heart to beat too quickly and out of sync with the lower chambers. People like Wolgemuth who have a history of high blood pressure are particularly at risk of developing the condition.
Dr. Behboodikhah advised her patient to take an aspirin a day until he returned to Orange County and could come in for a visit. Under her care, Wolgemuth, who is now 69, started taking a variety of medications, but he detested every one of them.

“Afib medication is the worst I’ve ever had to take,” said the longtime Orange County businessman. “The medication slows down your whole body. I felt as though I had aged by 10 years or more.”

Wolgemuth decided that he’d be willing to put up with his atrial fibrillation if it meant staying off the medications. Yet, when left untreated, af​ib can lead to serious conditions such as blood clots that can cause stroke and death. Ultimately, Wolgemuth was advised to take blood thinners – a solution he knew was only temporary.

Prolonged use of blood thinners leads to a host of other complications, and Wolgemuth found himself having to go to a lab at least every two weeks for regular monitoring.

To make matters worse, his atrial fibrillation was starting to worsen, with one episode in 2009 lasting for 10 straight days.

“You feel a bit of dread about it, like a cloud over your head. You take your heart for granted until it doesn’t work right,” said Wolgemuth, whose mother had also struggled much of her adult life with the condition. “It’s not the way you want to live your life.”

Behboodikhah told him he didn’t have to live this way. She explained other treatment options to Wolgemuth, and recommended a minimally invasive surgery called Mini Maze.

“Her specialty is electrophysiology of the heart, so she really knows her stuff,” said Wolgemuth, who has been off all atrial fibrillation medications and blood thinners since he underwent the minimally invasive surgery in 2009. Top cardiac surgeon Aidan A. Raney, M.D., Program Director of Cardiovascular Surgery at Hoag, performed Wolgemuth’s Mini Maze surgery.

In the three years since he had Mini Maze, Wolgemuth has experienced a single15-minute episode of atrial fibrillation – again following a strenuous day of clearing fallen trees from his Wisconsin property. His doctor wasn’t particularly concerned, but his wife has gently suggested that he might leave the wood chopping to his sons and sons-in-law.

Otherwise, Wolgemuth has been able to return to work and an active lifestyle without any problems. And after losing a bit of weight, he has even been able to keep his blood pressure under control without medications.

“I can’t find the words to describe my satisfaction,” Wolgemuth said. “There is something quite special about Hoag. It’s a very professional hospital, but there is a caring and consideration for the patients that lets you know you’re not just another patient.”​