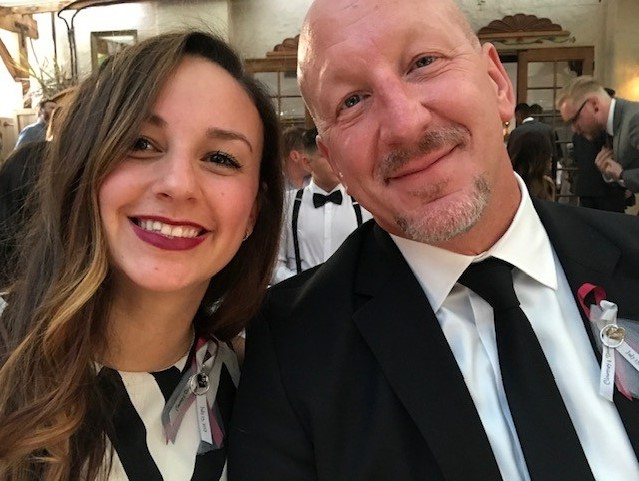 When Charlotte Davis’s dad complained about his back, the Hoag Spine Center nurse navigator knew two things: 1. The pain must be really bad for her active father to mention it and 2. Burak Ozgur, M.D., would be able to help.

“We were at dinner, and I told her I was scared to death of surgery, and that I was nervous because I don’t know how to choose the right doctor,” said Scott Frazee, who was 53 at the time.

“And I said, ‘Dad, there is someone I know that you should see,’” Davis said.

At the time, Davis was a recent nursing school graduate working on the Hoag Pickup Family Neurosciences Institute recovery floor and caring for patients after their operations. She knew of Dr. Ozgur’s reputation, and his published work. She also saw firsthand how fast Dr. Ozgur’s patients healed, how few complications they had and how they seemed to regain much of their quality of life.

That’s what Davis wanted for her father. She had witnessed Frazee’s sciatica issues grow increasingly more painful over a two-year period, affecting his mood, his work and his ability to enjoy himself.

“My symptoms went from discomfort and pain that I could tolerate, to pain that was too extreme to tolerate,” he said. “It got to the point that I couldn’t commute from Huntington Beach to work in Manhattan Beach. I thought, ‘I don’t know if I can take this much longer.’”

Despite the pain – and despite his daughter’s assurances – Frazee was not eager to meet Dr. Ozgur.

“I was stuck at home with no options and in severe pain, but I was worried because my brother had had surgery 15 years ago, and it took him three years to recover,” Frazee said. “Right away, though, Dr. Ozgur was wonderful. He explained that his first plan was to avoid surgery. We did cortisone shots and physical therapy.”

The non-surgical methods offered temporary relief, but after a few months, it became clear to that Frazee would require surgery. On Nov. 2, 2017, Frazee underwent a minimally invasive procedure to fuse two of his vertebrae and alleviate the pressure on his spinal cord. Again, Dr. Ozgur’s approach put Frazee at ease.

“He explained the different types of procedures that I could get,” Frazee said. “For me, he suggested going in through the abdomen, like a C-section. He explained it would improve the recovery.”

And it did. When he awoke from the procedure, Frazee was able to stand up, tall.

“It was the first time I stood straight up in a year,” he said. “I had no pain at all.”

Surgical patients at Hoag are encouraged to stand and walk as soon as they can after surgery, to aid in recovery. When Frazee completed his first lap around the hospital floor, he asked if he was allowed to do more. As his six-week recovery period progressed, instead of pain, Frazee dealt with a new problem: boredom.

“I felt fantastic. Two weeks into recovery, I tried to log in to my computer at work but my Human Resource manager required a doctor’s note to regain access,” he said. “Dr. Ozgur said, ‘It makes me happy that you feel wonderful, but you’re not fully recovered, so no doctor’s note until the full six weeks expires.’”

Davis helped make sure her dad stuck it out for the recovery period – a difficult feat, given that Frazee said his mobility had completely returned to him and that he didn’t require any pain medications.

The experience with her father never left her, and a few years later, Davis became the nurse navigator for the Hoag Spine Center, helping to guide patients through their treatments, help them keep track of their appointments and coordinate care among specialists.

“It was helpful to experience how doctors set their patients up for success,” she said. “I wanted to give other patients the experience of having what my dad had. It’s very rewarding.”

Frazee said he is grateful to both Dr. Ozgur and to his daughter for their excellent care.

A very physically active person throughout his whole life, Frazee said he recently had neck issues that he knew would eventually need to be addressed more aggressively down the line. Six years after his back surgery, he has returned to Dr. Ozgur’s care.  He is, understandably, not excited about the prospect of surgery, but he has trust in Dr. Ozgur – and he has a new motivation for taking care of his pain.

“I just had a baby a couple months ago,” Davis said.

“Jack,” said Frazee. “The cutest boy that’s ever been born. He’s our first grandchild. We keep him overnight to give Charlotte and Nick breaks. I do the night shift, and we crash next to each other on the couch. It’s been wonderful. I have no issues with mobility or in my ability spend time with him. I’m living my best life right now.”