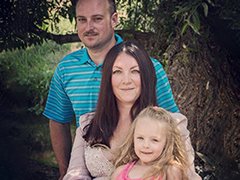 Chelsea Trimble had grown accustomed to physicians evading her questions, ignoring her concerns or dismissing them outright. Having experienced seizures since the age of 9, she was used to doctors and specialists working on her, rather than with her.

So, when the new mom met David Millett, M.D., program director of the Epilepsy Program at Pickup Family Neurosciences Institute at Hoag, she was completely surprised.

“Dr. Millett was amazing. I had been asking why I was having these seizures, where they were coming from and was there something else I could do,” said Chelsea, 33. “For the first time, someone explained it.”

After a series of tests, Dr. Millett was able to pinpoint the cause of Chelsea’s partial complex seizures, a very mild malformation of the cerebral cortex in the area of the brain that controls the right arm. With this knowledge, he was able to help Chelsea adjust her medications enough to tackle the responsibilities of motherhood – and to plan for her second child.

“When I was pregnant with my first child, the first trimester was so hard because it took us awhile to figure out how to adjust my medications. I was taking 20 pills a day,” she said. “We knew we wanted to have a second kid. We knew we needed to address my medical situation, and Dr. Millett helped with that.”

When Chelsea’s daughter, Quinn, was not quite 2, Dr. Millett recommended a series of tests to pinpoint the precise location that was generating seizures. She underwent a Phase 2 evaluation – with grids of electrodes implanted on the surface of the brain to precisely map out the network of abnormal electrical activity. Following this testing, Dr. Millett recommended an implanted device called a Responsive NeuroStimulator or RNS. Recently approved by the FDA, the RNS system operates like a defibrillator for seizures, continuously recording electrical activity from the brain and, when it detects the beginning of a seizure it generates a burst of electrical pulses to try to stop it.

“I wanted to be able to get off medication and have a stress-free second pregnancy,” she said. “Dr. Millett had new ideas and was enthusiastic about wanting to help.”

Chelsea was one of the first patients in Orange County to receive an RNS implant. The surgery proved successful, and four months ago, she and her husband greeted their second child, a son named Remington.

“Before the surgery, I would have to see how I felt before I made the decision to drive anywhere. Do I feel OK to be alone with my kids? I rarely have to think about that because I do feel well and under control,” she said. “The stress has been lifted.”

Once shy about discussing her epilepsy, Chelsea now takes to social media to describe her journey and share her insights. Her most consistent piece of advice is to not settle.

With Dr. Millett, Chelsea found that champion – a whole office of them, in fact.

“That’s another awesome thing: everyone in his office is there to help you,” she said. “One of the nurses, Hoag Epilepsy Program’s Nurse Navigator, Sheena Dhiman, always goes above and beyond to make sure we are OK. I can email her any time of day, even a holiday, and she’ll answer.”

That passion and dedication to patients has made all the difference to Chelsea and her family.

“Not only do they care, it’s almost like a challenge to them. Dr. Millett wants to figure it out. He wants to help you to the best of his ability,” she said. “They’re willing to go above and beyond.”