Home > Patient Stories > “I Had Seen So Many Doctors. What Was Going to Be Different?” 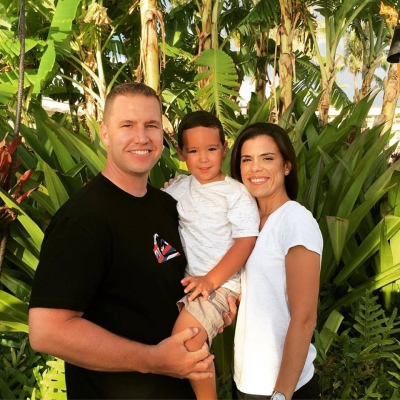 Tiffany Mueller used to call them her “gas station episodes.”

She’d stare at a common object and draw a blank. Holding a book, she’d ask her mother or fiancé, “What is this called? Is it a…” and every single time, she’d finish the sentence with “gas station?”

“That was just the word that would always come to my mind, ‘gas station,’” she said. “They’d look at me in total terror.”

An otherwise healthy 25-year-old in her final year at California State University, Fullerton, Tiffany consulted doctors who diagnosed her with anxiety and depression. Her memory loss started to affect her final year of college so severely that she considered dropping out. But she earned her BA in business marketing, and in 2006, she married Ryan Mueller, a reserve firefighter.

“One night I woke up to a room full of firefighters,” she said. “The firefighters knew my husband and they all said, ‘Ryan, what are you doing here?’ He said, ‘This is my house, and my wife just had a seizure.’”

Tiffany’s immediate thought was, “I don’t have seizures.”

Tiffany was taken to the emergency room where she learned that her “gas station episodes” had been focal seizures. She didn’t have depression. She had epilepsy.

That night set her on a frustrating 11-year journey. She saw a half-dozen neurologists who weren’t able to identify the problem. They prescribed medication after medication, but nothing really helped.

“My gas station episodes continued and progressed to becoming complex partial seizures,” she said. “I got to a point in my life where I’d have one or two seizures a day – upward of 12 to 15.”

During these complex partial seizures, Tiffany would “go blank,” shutting her eyes and smacking her lips. As a successful real estate agent, the situation was becoming untenable.

“When I would meet with a client, I’d have to say, ‘I am epileptic, and I have seizures. If I have one, just know I’ll be back,” she said. “It was embarrassing, but what was I going to do? I am very strong in my faith. I prayed about it daily.”

Tiffany had to stop driving, relying on paid drivers or rides from her mom (and business partner), Stephanie. She restricted her diet based on advice from physicians.

“I struggled for so long, thinking this was just how my life was going to be,” she said.

One day in 2017, she received a call from a colleague who was selling a neurologist’s home. The colleague connected the two, and Tiffany decided to go see him. But her expectations were low.

“I had seen so many doctors, had so many tests done. What was going to be different?”

David Millett, M.D., Ph.D., a board-certified neurologist specializing in seizures, epilepsy and electroencephalography, consulted with Tiffany, then studied her seizures and her MRI. He noticed something that no one else did: given the location of her cavernoma, or an abnormal group of blood vessels in her brain, all of her seizures were probably originating from this single lesion. He recommended removing the cavernoma, and perhaps the seizures would stop.

Dr. Millett, director of the Epilepsy Program at Pickup Family Neurosciences Institute at Hoag, conducted several more tests to confirm the location of important language functions, and then introduced Tiffany and her family to neurosurgeon Charles Liu, M.D.

Six weeks after her surgery, the seizures are gone. She said she is more alert, and the “gas station episodes” are a thing of the past.

“My memory and naming ability are awesome now,” she said. “My husband said from the moment I woke up from surgery, ‘The old Tiffany is back.’ Dr. Millett and Dr. Liu are phenomenal. I am so I am so grateful for the help they’ve given me.”

She’s not the only one.

“The day I came home from my procedure my 5-year-old son was driving in the car with my mother-in-law and said, ‘Grandma, if mommy’s seizures are gone she can drive, and we can go places by ourselves,’” Tiffany said. “For so long I haven’t been able to be the mom I wanted to be. I am so appreciative.”