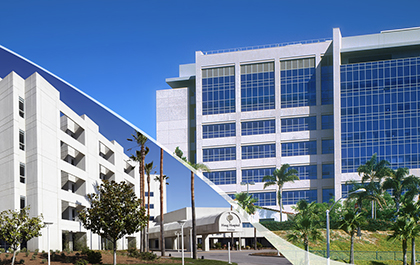 Cancer ran in Andrea’s family, but it wasn’t exclusively one type of cancer, and it didn’t seem to follow a hereditary pattern. So, the Hoag post-anesthesia care unit nurse never really considered the possibility that she was at high risk.

Then Andrea’s sister discovered she had Li-Fraumeni syndrome, a hereditary disorder that is linked to a wide-range of cancers, including breast, brain, blood and bone cancers.

“That’s when I called the cancer center at Hoag to get myself tested,” she said. “I had heard of BRCA,” the genetic mutation associated with an elevated risk of breast and ovarian cancer. “But I had never heard of Li-Fraumeni. Once my sister tested positive for this gene, I looked it up and saw what it meant and that it was a dominant gene. I hoped it skipped me.”

According to the National Institutes of Health, Li-Fraumeni syndrome is so unusual, that it likely affects only 400 people from 64 families. Equally rare are programs and specialists who are skilled enough to provide the expert care needed for people with such uncommon disorders.

Andrea said she always held Hoag in high regard as a nurse. Now as a patient, she is particularly grateful. As painful as it was to learn that this syndrome also affects her and her young daughter, the hereditary cancer team at Hoag has been “incredible,” particularly genetic counselor Frances Oh, M.S.; physician advisor Michael Demeure, M.D.; and genetics specialist Valentina Dalili-Shoaie, M.D.

“It was super scary, but Frances in Hoag’s Hereditary Cancer Program was awesome. She was nice and informative. She gave us all sorts of information and told us about the plan and screening process. She was very helpful at a bad time,” Andrea said. “That is what has been great about the program.”

Andrea remembers vividly sitting in a small room with Frances, as she explained the disorder and the recommended screenings. She took her time, listened to Andrea’s concerns for herself, her daughter and her family, and armed her with the information she would need to move forward.

“She made a bad situation feel like there was hope,” she said.

That hope comes from knowing she is surrounded by dedicated specialists who lead not only in cancer care, but in prevention. Andrea said she was relieved to learn that Dr. Demeure is involved in a long-term study of patients with Li-Fraumeni syndrome. This means that the cost for the intensive screening regimen she requires is covered, removing one burden from is already a stressful situation.

Andrea underwent a whole-body MRI, a brain MRI and a breast MRI. She has received a colonoscopy, an endoscopy, an abdominal ultrasound, lab work and full-body dermatology.

“All these things I never wanted to know about my body, now I now,” Andrea joked. “When they did the breast MRI, they saw something and did a biopsy. It turned out to be nothing, but I would rather be on top of everything. That’s the good thing about screening. If anything pops up, we’ll catch it early on.”

Dr. Dalili serves as the main point person for Andrea’s care, and has helped coordinate and plan her many screenings.

“She answers all of our questions, and I feel like she really cares. That I’m not just another patient,” Andrea said. “All the doctors at Hoag have been great. I feel comfortable when I’m there. It’s a great place, and I know that because I work there.”

Andrea said her work affords her more access – she said she was able to take Dr. Demeure aside one day in the hallway to discuss her “stupid gene” – but she knows from experience that all patients receive the same level of quality care and compassion.

“I feel safe, like I’m in good hands,” Andrea said. “Everything is streamlined. I get my tests done, and they gave me all the resources and the timeline of when I will get all my annual screenings done. In this situation, it has been so helpful.”

Andrea said that while it disheartening to know that she is at high-risk of developing a host of cancers, the care she receives at Hoag has been a “silver lining.”

“I feel like we are doing everything we can to stay on top of it,” she said. “So many people get cancer without this gene. I feel lucky that if anything happens, we’ll catch it early. Everyone here is so helpful and patient. I feel safer. I do.”