Home > Patient Stories > Hoag is Well Worth the Trip 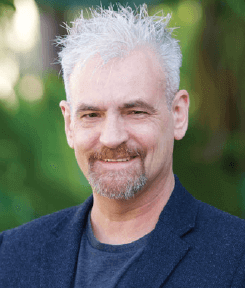 A sinus infection that wouldn’t wane was the first sign something was wrong. Irvine resident Gregg Slater decided he needed to get checked.

“Normally I would’ve just blown this of f and tried to deal with it, but I was feeling my neck and felt one of my glands swollen,” the 51-year-old musician said. “I realized it was probably a worse infection than I thought.”

Slater in February 2015 learned what he was experiencing wasn’t an infection at all, but tonsil cancer that had spread to nearby lymph nodes.

Doctors learned Slater’s cancer was caused by a strain of the human papilloma virus — which physicians say is the culprit for a sharp rise in head and neck cancers in recent years.

The good news for patients like Slater is this type of cancer is highly treatable and very responsive to chemotherapy and radiation.

“Times have changed with cancer treatment,” he said. “If it’s caught early, it’s something that can be beat. Before treatment even started, my doctors were very confident and very positive this would be successful.”

At the time Slater was diagnosed, he lived in Santa Barbara, but he frequently visited Orange County because he was dating his now-wife, Kristy.

Normally he wouldn’t date a woman who lived so far, he said, but the two had so much in common and an undeniable spark, which may have helped save his life.

Slater researched where he should get care in the Santa Barbara and Orange County areas since he had the option to live with Kristy in Irvine while receiving care.

His brother, who lives in Arizona, told Slater he would help with researching hospitals.

“My brother works in the medical field and he works with a lot of top cancer doctors,” Slater said. “He asked all of them, ‘Where would you go? Where’s the best place?’ Every single one of them said Hoag in Newport.”

To get the best, Slater would have to move to Irvine with his girlfriend and put his trust in the medical team at Hoag Family Cancer Institute, specifically, the Hoag Head & Neck Cancer Program.

Part of Slater’s right tonsil was removed and he underwent eight weeks of radiation and three rounds of chemotherapy.

Slater’s medical team, which included oncologist Dr. Minh Nguyen and radiation oncologist Dr. Craig Cox, were not only expert in delivering car e, but patient and kind, he said.

“They were very good at making me feel like I was being taken car e of and I was not just a number being passed through the system,” he said. “Every single person I dealt with was incredibly caring.”

Treatment was difficult, but Slater said he fought through it by staying busy and surrounding himself with support.

“I never missed a day of work and that pushed me to keep myself feeling as good as possible,” he said. “Being here with my wife really helped and we also have two really cool cats. I think animals have a great way of making you feel better.”

Slater continues to check in with his medical team at Hoag to ensure he is staying cancer free, but his life has again returned to days spent cooking with his wife, attending concerts and planning their honeymoon in England.

“It was not an easy treatment but what I went through was a small price to be well,” he said.

“My life is totally back to normal. I’m really thankful.”