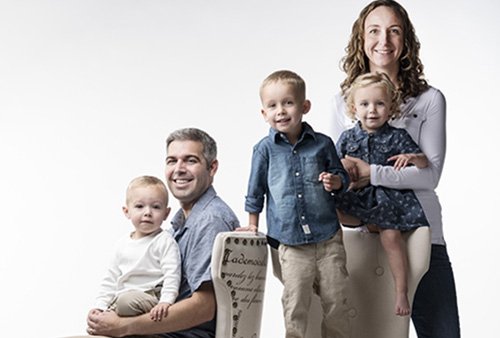 This is significant not only because her children are young and rambunctious and adorable (which they are). It is significant because they might never have been born.

Diagnosed with mitral valve prolapse at the age of 14, Jenny’s heart condition was monitored for more a decade before it became obvious that she could no longer put off surgery. With a condition as bad as Jenny’s, most hospitals would have her undergo a mitral valve replacement.

Women with prosthetic valves are at a higher risk for complications during pregnancy. A practical, scientifically minded pharmacist, Jenny resigned herself to the idea that she and her husband, Brian – her college sweetheart, would not have children.

But she didn’t give up hope entirely. Jenny, who was living in the Bay Area at the time, decided to seek care at Hoag’s Jeffrey M. Carlton Heart & Vascular Institute with one of the world’s most experienced mitral valve repair surgeons, Aidan Raney, M.D., James & Pamela Muzzy Endowed Chair in Cardiovascular Surgery.

“You want to go to someone who has done this for breakfast, lunch and dinner for 20 years,” said Jenny, who is now 35 and recently hit the 10-year anniversary of her surgery. “I asked him, ‘What would you do if I were your daughter?’ And Dr. Raney said, ‘I treat all of my patients as if they were my children.’”

Dr. Raney recommended a mitral valve repair, a very difficult and precise surgery that would spare Jenny from having to undergo a replacement surgery and allow her to pursue her dream of becoming a mother.

Jenny’s condition was particularly rare and treacherous, and the six-hour surgery was not easy.

“It was worse than anticipated. After the surgery, Dr. Raney came out to talk to my family in the waiting room, and he was pouring with sweat,” Jenny said. “He said that was one of the top five most difficult repairs he’d ever done.”

Jenny praises the work of Dr. Raney and of internationally renowned echocardiography pioneer Pravin Shah, M.D. During surgery, Dr. Shah performs a highly advanced ultrasound of the heart to give the surgeon the information needed to ensure the best possible outcomes.

“He makes sure that everything is good before they sew you up,” Jenny said. “Dr. Raney and Dr. Shah are just incredible.”

Jenny said the rest of Hoag’s medical team and staff also made her feel confident in her care.

“I work in the medical field, so when I’m in a medical situation I tend to manage things and make sure they go OK,” said Jenny, who now lives in Bend, Oregon. “At Hoag, the care is so comprehensive and the medical team is so attentive that I could just lie back and heal. I didn’t have to manage anything because they know what they’re doing. As a patient, you feel safe.”

Every year, Jenny and Brian send Hoag’s team Christmas cards featuring smiling pictures of their family. Their oldest son is now 4, and the twins are 2.

“We assumed we couldn’t have children,” Jenny said. “I look at my three kids, and I think, ‘Dr. Raney gave me this.’ He worked so hard and sacrificed time with his family to give me mine.”