Home > Patient Stories > Glioblastoma Patient to Hoag: ‘You Made My Year’ 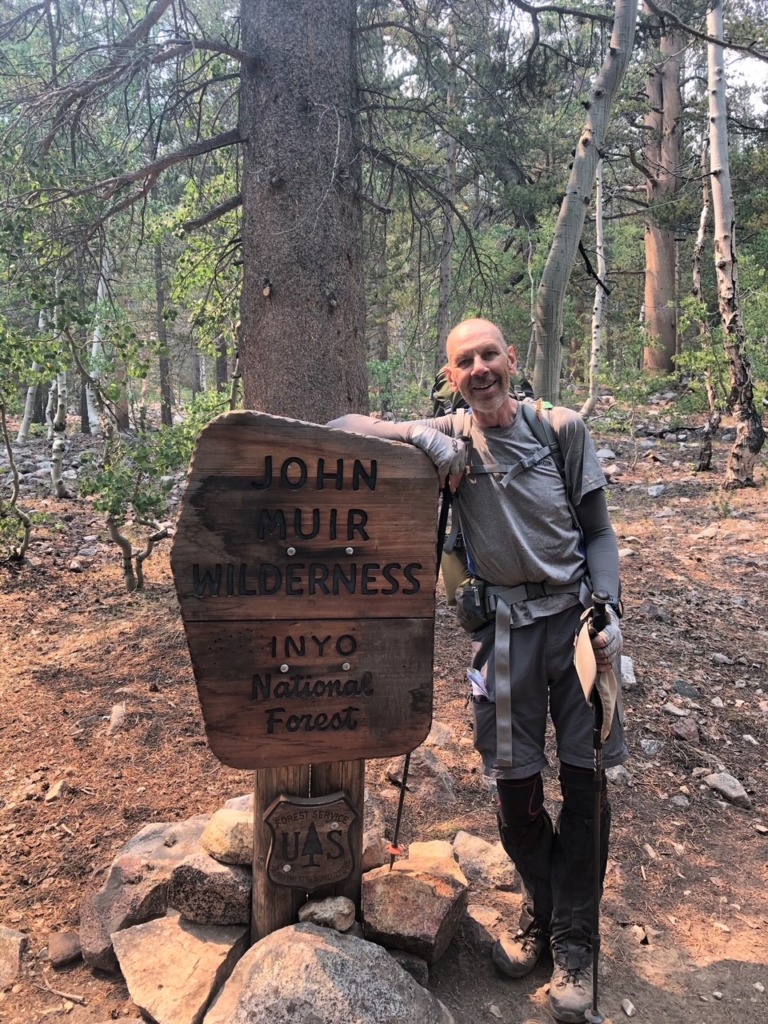 Exactly one year after his life-altering surgery, Bernd Frauzem sent Robert Louis, M.D., Director of the Skull Base and Pituitary Tumor Program at Hoag’s Pickup Family Neurosciences Institute and Empower360 Endowed Chair in Skull Base and Minimally Invasive Neurosurgery, an email and a few photos. In the pictures, he’s smiling broadly, posing by a John Muir Wilderness park sign, where, in September, he’d completed an eight-day backpacking trip with his family. A few months earlier, he’d been skiing with friends. And in October he traveled to Germany to meet his new granddaughter.

“Thanks to the amazing work and encouraging words from you and the whole Hoag team, I was able to do all the things this year I had planned,” he said. “I will never forget your words that this surgery wasn’t done so ‘I could sit in a glass house.’”

In early October 2019, Bernd fainted in his office in Cypress, CA. Mistaking his collapse for a heart attack, paramedics rushed him to a nearby hospital, where doctors found his heart in good condition. They did not check his head, although he had hit it when he fell.

Shortly after, Bernd’s wife noticed that the avid hiker veered to the right whenever he walked. At her urging, he saw his primary care physician who ordered a brain scan.

“They found an orange-size tumor on the right side of my brain,” Bernd said. “Three days later on Halloween, Dr. Louis removed the tumor. I remember telling him that he’s carving me like a pumpkin.”

Despite his good humor, the gravity of the situation was terribly jarring. His tumor, a grade 4 glioblastoma, is aggressive and quite often lethal. Bernd had gone from a healthy and active outdoorsman to a possibly terminal brain cancer patient in a matter of weeks.

“My life was turned upside down. I told Dr. Louis, ‘I had so many plans for this year,’” he said. “Dr. Louis said, ‘Write down those things that you want to do.’”

The list was like a talisman, a reminder of what he was working toward during his brain cancer journey: Meeting his new granddaughter, skiing, and backpacking with his family.

Bernd felt understood by Dr. Louis and the Hoag team, and he knew he was in good hands.

“I had full confidence in Hoag. The technology that Hoag has is amazing. Dr. Louis used a simulation program and ‘went’ into my head before he even conducted the surgery,” Bernd said, of Hoag’s Surgical Theater capabilities that allow surgeons to rehearse complex procedures using advanced 3D modeling to plan the most precise and effective approach.

Hoag’s participation in clinical trials also afforded Bernd access to Pritumumab, a novel immunotherapy treatment that holds promise for glioblastoma. Bernd has been impressed with the advanced offerings at Hoag and with the compassionate care he received.

“At Hoag, everyone is very knowledgeable, very human,” he said. “Dr. [Jose] Carrillo, my neuro-oncologist, is very helpful. Any time that I have a question, I can ask Dr. Carrillo and he will answer it. He encouraged me to stay active. You can tell that they really care about their patients.”

Dr. Louis was able to safely remove 98% of the tumor. To target the remaining portion, Bernd received chemotherapy with Dr. Carrillo and has been outfitted with Optune, a wearable device that creates low-intensity electric fields that might stop glioblastoma tumor cells from dividing and possibly destroys them. The device connects to arrays in Bernd’s head and is worn in a backpack, which Bernd has dubbed “Elmer Fudd.”

Elmer Fudd has gone everywhere Bernd has gone in the last several months, including hiking, biking and a visit to Germany to meet his first grandchild

Bernd is not completely through his treatment, and he says his memory, concentration and balance are still improving. He said doctors also noted a slight decrease in the vision in his left eye, but he doesn’t notice it. What he does focus on is the fact that he has been able to meet every goal on his list.

Meeting his new granddaughter, skiing, backpacking with his family.