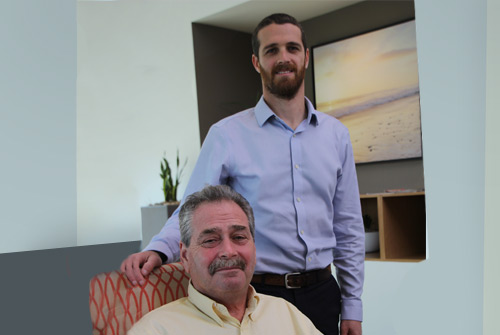 Having a heart attack at 32 is horrible enough. But when you’re told that the cause of your ailment is genetic, and you have two young boys at home, it does something to your psyche. For some, knowing you have genetic high cholesterol might leave you terrified. For others, like Gary Leibowitz, it will bring out the fight in you.

A bankruptcy attorney, Leibowitz said he knew he had high cholesterol at age 15, but not much was understood about cholesterol at the time. After his heart attack, his wife did some research and put together a non-fat diet for the family long before most people had heard of such a thing. Despite the careful diet, exercise and introduction of statins, Leibowitz went on to survive two more heart attacks.

But it was the fourth heart attack of his life that really shook him. Because this one didn’t happen in his own chest.

When the Leibowitzes learned that Gary’s cholesterol issue was genetic, they had their sons tested. Danny, at age 5, learned he was going to follow in his father’s footsteps. And in 2017, at the age of 34, Danny suffered a heart attack.

By this time, Gary Leibowitz knew a lot more about genetic high cholesterol. In 2016, with Hoag on his side, Gary fought insurance companies for a new injectable drug, Praulent, which has helped him to bring his cholesterol levels way down with virtually no side effects.

“I knew from the research that this drug would work for me, but insurance wouldn’t budge. My doctors at Hoag were in my corner. They wrote letters to help support my fight with the insurance company, and it has made all the difference,” Leibowitz said. “Now, we’re going to do the same for Danny.”

While not entirely unexpected, Danny’s heart attack surprised him. Unlike his father, he grew up knowing all about high cholesterol. He was never allowed to eat birthday cake as a kid. He knew about the particular importance exercise has for him, and he always stayed in shape. He began taking statins at the age of 14.

In fact, his physical appearance, age and lifestyle led doctors at a different hospital to question Danny’s suspicion that he was having a heart attack.

“I drove myself to the ER, and the doctor there told me I was a hypochondriac,” Danny said.

A blood test confirmed that he was, indeed, suffering from a heart attack. His father and his father-in-law immediately worked to get Danny transferred to Hoag.

At Hoag, Subbarao Myla, M.D., the medical director of the cardiac cath labs at the Jeffrey M. Carlton Heart and Vascular Institute, found Danny had a 100 percent blockage in one area of his heart, and an 80 percent blockage in another. Dr. Myla was able to insert one stent to open the two areas and restore full function to his ailing heart.

“I would never go anywhere other than Hoag because the care you receive there is so substantially different than any other hospital,” Gary Leibowitz said. “You get the sense that the nurses and physicians love what they do.”

Both Gary and Danny also admire the way the hospital will back them up when they’re fighting for the best treatment options.

“You have to push and really fight for it,” Gary Leibowitz said.

Both father and son are attorneys, and both feel as though their legal background helps them find and push for the right treatments. But having the support of the hospital is immeasurable.

“Thanks to the care at Hoag, I’m back surfing and playing sports,” Danny said. “And I’m going to have my three kids tested.”