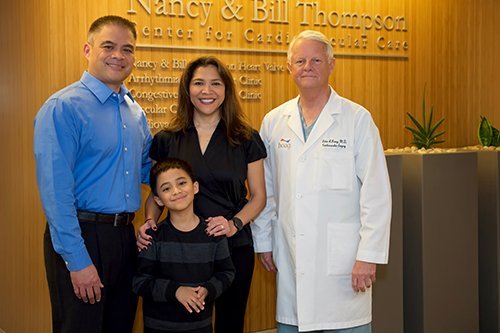 Angela Canlas still tears up when she thinks about her heart surgery, one year later.

“I live in Nevada, but my cardiologist told me that if I were his daughter, there’s only one doctor he’d send me to and that I’d have to head to Newport Beach,” Angela said. “He said, ‘He’s the best.’”

So, kissing her son goodbye and apologizing for missing his first few weeks of first grade, Angela headed out to Newport Beach for a surgery to repair her mitral valve and correct her heart murmur. She knew she’d be in good hands. But she was terrified.

Angela knew Aidan A. Raney, M.D., is one of the world’s most experienced mitral valve repair surgeons, and Pravin Shah, M.D., is an internationally renowned pioneer of echocardiography. What she didn’t realize is that they are also committed and kind.

From the very beginning, Angela’s doctors worked to make her feel comfortable and confident about the robotic mitral valve repair surgery she was going to undergo at Hoag’s Jeffrey M. Carlton Heart & Vascular Institute.

“Everyone is so nice, and they make you feel cared for,” Angela said. “While they were doing the surgery, they found a hole in my heart that I apparently was born with, so they closed that up, too. My heart is completely fine now. I am so grateful.”

Angela no longer gasps for breath when she speaks, she can chase her 7-year-old son around without raising her heart rate to dangerous levels and her heart murmur is gone.

Dr. Raney, medical director of cardiovascular surgery at Hoag, is a leader in minimally-invasive techniques that allow patients to undergo major surgeries with minimal incisions and much easier recovery periods. For Angela’s surgery, Dr. Raney made three tiny incisions in her utilizing special instruments to perform her mitral valve repair.

Although the American College of Cardiology recommends this approach to mitral valve regurgitation when appropriate, too few surgeons have enough experience to perform the intricate surgery. Instead, many patients undergo an open-chest surgery to replace the valve, not repair it, and are left with a six-inch scar afterward.

“You can’t even see it,” Angela said, of the incisions. “And after three weeks, I didn’t even need pain medication anymore.”

Hoag’s well-earned reputation for patient care and positive outcomes means that people like Angela come to Hoag from across the country expecting expert treatment. What they don’t expect is the high level of personal care that comes with it.

“From the time I got there for pre-op, to my surgery and my entire stay, through the very last moment when they’re wheeling me out to the parking lot in the wheel chair, everyone was so nice and sweet and kind,” Angela said. “I thought, ‘Everybody here is just outstanding.’”