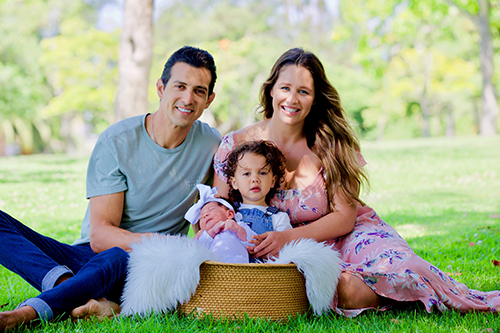 Jessica Vallejo learned with her first child that childbirth doesn’t always go as planned. In 2018, a routine 36-week check-up turned into an overnight observation stay at the hospital due to her son’s heart rate dropping. After her son, Maverick, experienced multiple, sudden and dangerous heart rate drops, she was rushed to the operating room for an emergency C-section, but thankfully he was born healthy. Gone was the planned natural birth, the curated soundtrack and the hoped-for snuggle in those first moments of life. As terrifying as those moments were leading up to Maverick’s birth, the important thing was that mother and child were healthy and safe.

While Jessica hoped for a VBAC (Vaginal Birth After Cesarean) for her second child, she knew that anything could happen – and that giving birth during the COVID-19 pandemic would likely prove challenging enough. Still, she spoke about what an ideal birthing experience would be like for her.

“I call this my ‘redemption birth,’” Jessica said of her successful VBAC. “Giving birth during a global pandemic is extremely terrifying on many different levels mentally, emotionally, and physically, but the whole experience was warm, inviting and first-class.”

Obstetrician Jeff S Illeck, M.D. reviewed Jessica’s previous delivery (with a different physician), assessed her condition and determined Jessica was an excellent candidate for a VBAC. Even when the baby “decided to take her time,” Dr. Illeck worked with Jessica to make her dream birth a reality.

“I got to 40 weeks, and the baby was nowhere close to coming. I know a lot of physicians in that situation would say, ‘Let’s induce or schedule a C-section,’ but Dr. Illeck validated my feelings and worked with me. They prefer that moms don’t go past 42 weeks of pregnancy, so he agreed to schedule an induction on the last possible date before the 42-week mark,” she said.

It was a precaution that allowed Jessica to go into labor naturally, just as she’d hoped, twelve hours shy of her scheduled induction.

“Dr. Illeck came in, evaluated the progress and said, ‘Oh, you’re having a VBAC!’ He was a really good cheerleader,” she said. “It was calm and magical. It was so different from the first experience.”

Outside the delivery room, the world was dealing with one of the worst health care crises in a century. But inside that room on May 17th, Saylor Jo made her debut peacefully and joyfully, to the sounds of 80s hits and country jams from Jessica and Michael’s playlist.

At every turn, Jessica was met with calm professionalism in the face of impossible odds due to COVID-19 allowing Saylor’s birth and the family’s entire experience at Hoag to be exceptional.

“I was so anxious when everyone had to quarantine, I worried myself sick and got a cold. All the stories about how dads can’t go into hospital delivery rooms, the horror stories I was hearing, I literally made myself sick about it,” she said.

Checking in with her doctor and with Hoag’s maternity app helped put Jessica at ease. Yes, the hospital was enforcing new safety protocols that limited the number of visitors, but Michael would still be allowed in the room, provided he didn’t have a fever or other symptoms.

Dr. Illeck also alleviated another fear Jessica harbored: He told her that the hospital itself is safe, despite the pandemic. As soon as she got to Hoag, Jessica knew Dr. Illeck was right.

“I’ve worked in medical practices before, and sometimes the day to day operations can cause employees to become desensitized to a patient’s anxious or worrisome feelings. At Hoag it’s not like that. They are always a top-notch facility, but in this situation, they were extra respectful of patients’ anxiety,” she said. “Everyone, from the people who met you at the door to check your temperature to the nurses, to food services and cleaning services were all very professional and attuned to the fact that this is a scary situation.”

The new safety protocols meant that Maverick couldn’t meet his new sister at the hospital. Nor could anyone else from Jessica and Michael’s family. That’s where the nurses stepped in.

With incredible attention and compassion, the nurses who took care of Jessica and Saylor worked to make the family’s bonding time special while they were in the hospital – and even after they had left.

“A couple weeks later, we received a handwritten card from one of the nurses,” Jessica said. “Also, someone from the hospital called to check and see how I was doing, physically and emotionally. That means so much to me.”

“You don’t have your tribe during this situation,” she said. “My dad just finished chemotherapy, my mom is preparing for a major surgery and my father-in-law has pre-existing lung conditions, so we haven’t been able to have that special family bonding experience as we are taking the necessary precautions with social distancing. The fact that Hoag is calling and checking on me, that’s really helpful and honorable.”

Post-childbirth is naturally a time of heightened emotions; during a pandemic, even more so. Hoag offered to set up a postpartum, virtual therapy session for Jessica so she could begin to process what it was like to give birth during a pandemic without ‘her tribe’ while also navigating the new normal of becoming a mother of two, which she accepted.

“Being a new mom of two, you don’t take time to do anything for yourself. I knew I wouldn’t have called to set up the appointment, so they set it up for me,” she said. “I was so appreciative. Hoag has just been first-class all around.”