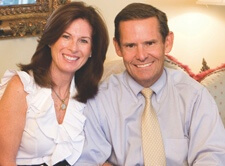 ​Many people worry about hereditary cancer, especially if they have a close family member who has had cancer. Although most cancers are not hereditary, in some families a predisposition to cancer is passed down from one generation to the next, with about one in 10 cancer patients having hereditary cancer. It is also important to know that hereditary cancer can be inherited from either parent.

In fact, there are more than 40 different hereditary cancer syndromes or conditions that have been identified. The most common of these are the hereditary breast and ovarian cancer syndrome (HBOC), and Lynch syndrome. Lynch syndrome can cause cancers such as colorectal cancer, uterine cancer, urinary tract cancer and upper gastrointestinal cancers.

The Hereditary Cancer Program at Hoag offers a variety of services to individuals who are concerned about hereditary cancer. The program is led by certified genetic counselor, Jeanne Homer, M.S. and her associate, Mariana Niell, M.S. The goal of the program is to help people become aware of their cancer risk. Through a one-on-one consultation, an individual can be put at ease knowing they do not have a risk for hereditary cancer, or can become aware of their risk, if a syndrome or specific cancer-related gene is identified.

Although a person with a hereditary cancer syndrome has a much greater chance of developing cancer, it does not mean that they are destined to get it. Each individual is different.

The importance of genetic counseling and genetic testing

“It is very important that an individual receive genetic counseling both before and after genetic testing,” asserts Homer. “Without genetic counseling and a thorough evaluation of a person’s family history or past cancer history, things may be missed.”

An excellent example of the benefit of receiving both genetic counseling and genetic testing is seen in Patty Goethals’ story. Patty Goethals, a Newport Beach resident and mother of three, is a three-time cancer survivor – surviving melanoma skin cancer, uterine cancer and breast cancer. The most recent of these is her survival of breast cancer.

Following her diagnosis of breast cancer, Patty was concerned that based on her history of cancer her daughter and two sons may be at risk as well. Her physician, Hoag breast cancer surgeon Alice Police, M.D., referred Patty to the Hereditary Cancer Program at Hoag.

During the assessment of her family history, Homer discovered that both Patty and her mother had once battled uterine cancer, and her brother had bile duct cancer. Both of these cancers are linked to the hereditary cancer syndrome called Lynch syndrome.

“If Patty had not received genetic counseling prior to genetic testing, she probably would have only received testing for hereditary breast cancer, and would have never discovered that she has Lynch syndrome – a completely different syndrome unrelated to breast cancer,” explains Homer.

Since Patty’s discovery of Lynch syndrome, her siblings have also received testing. Four of the five were positive for Lynch syndrome. Now empowered with this vital information about their family genes, Patty and her brothers and sisters intend to share this information with their adult children, who may be able to take steps to prevent cancer.

Individuals with Lynch syndrome have a 70 to 80 percent chance of developing colon cancer during their lifetime, and are at greater risk for other Lynch syndrome associated cancers, such as uterine, stomach, ovary, small bowel, pancreas, or renal pelvis cancer. With the detection of the Lynch syndrome gene, Patty will now receive more frequent colonoscopy screenings, to detect and prevent any onset of colon cancer.

“Hoag’s Hereditary Cancer Program is such an important life-saving resource. I now feel empowered to protect myself and my family and make sure they receive genetic counseling and testing,” shares Patty. “My children, and many other family members may be carrying this gene, and it’s crucial to find it early.”

Winning the battle against cancer

Hoag Family Cancer Institute is pleased to offer the Hereditary Cancer Program to help patients like Patty and their families win the battle against cancer. Many insurance companies will cover all or part of the cost of these services. Self-referrals are accepted. It is also important to know that in 2008, a federal law called the Genetic Information Non-Discrimination Act (GINA) was passed that prohibits health insurance companies and employers from discriminating against individuals based on their genetic information. Additionally, all information shared with the genetic counselors and during genetic testing is protected under Health Insurance Portability and Accountability Act (HIPAA) law.