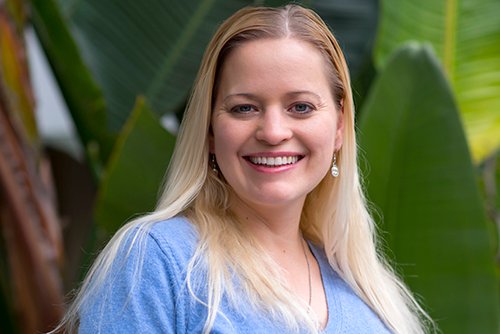 Melanie Comerio didn’t want that scar. That big, slash-across-the-throat scar that she identifies as the mark of a thyroidectomy. For Melanie, it is the first thing she notices when she meets a thyroid cancer survivor, and it was something she deeply wanted to avoid.

“I knew that every time I looked at that scar, it would be a reminder of how I got it. It seemed so depressing,” she said. “I didn’t need the reminder that I had had cancer.”

Like 54,000 people in the U.S. every year, Melanie developed thyroid cancer. And like 93,000 people who have a variety of thyroid-related issues, Melanie was advised to undergo a thyroidectomy, a procedure that involves removing all or part of the thyroid.

But unlike any of them, Melanie had the opportunity to avoid that scar.

At Hoag, Melanie became the first person in Southern California to undergo a scarless transoral endoscopic thyroidectomy procedure. Hoag is one of the first hospitals in the nation utilizing this new, innovative technique that avoids visible scars by accessing the thyroid through three small incisions inside the mouth, under the lower lip.

Using an endoscope, surgeons are able to remove the thyroid gland without cutting into the patient’s neck.

Some patients would be hesitant to be the first to undergo a new procedure, but Melanie said Colleen Coleman, M.D., instilled her with trust.

“Dr. Coleman was very honest and said, ‘There’s a brand-new procedure that I’ve never done before.’ She told me the pros and cons and asked me to take a couple of weeks to think about it, but I was stoked that I was qualified to take part in it,” Melanie said. “I said, ‘I totally trust modern medicine. I totally trust Hoag. I know you’re not going to do anything risky.’ The more I researched and learned about it, the more I wanted to do it.”

The procedure to remove part of her thyroid was conducted flawlessly, and recovery went equally well. Most importantly, the fatigue and flu-like conditions that dogged Melanie before the surgery has been lifted.

“I’m very glad I did this,” she said. “I couldn’t believe how easy it was, recovery was great, and I have felt amazing ever since.”

Cancer runs on both sides of Melanie’s family; her mother died of colon cancer at the age of 53. So, when Melanie started to feel low energy, she said she had a “gut feeling” it was thyroid cancer.

“I felt like a ticking time bomb. Like cancer was in the cards,” she said. “When they found the nodule, I thought, ‘There it is.’ It’s still shocking to hear you have cancer, but I think it made it easier because I knew it was coming.”

Melanie’s foresight also meant the cancer was caught at an early stage, before it had a chance to spread.

“I felt lucky because it was stage one, and it was easy to cut out,” she said. “The only other surgery I’ve ever had was to remove my wisdom teeth and recovery for that was way harder.”

Despite the excitement for the new procedure and the knowledge that her cancer was caught early, Melanie still had to contend with the fact that she had cancer. Her family traveled from Las Vegas to be by her side, and the stress and reality of undergoing a cancer procedure weighed heavily on all of them. Melanie said the medical staff at Hoag was instrumental in helping her and her family get through the process.

“All the nurses were so kind, and everybody was so thorough,” she said. “One thing about Hoag that I was grateful for is that it is clear they’re all in the field of medicine because they want to help people. I was treated like a valuable person. I don’t know how they’re trained, but they do a good job of treating people well during a stressful situation.”

Aside from a few weeks of strained speaking, recovery went smoothly, Melanie was able to leave the hospital the next day and she was back to work within a month. She felt the procedure allowed her to continue with her day-to-day life without much interruption or disruption.

But being a pioneering patient for a new procedure does have one drawback: People don’t fully understand her story.

“Explaining the surgery has been the biggest obstacle. It’s so beyond people’s comprehension,” she said. “They think recovery should have taken longer or that I should be weaker.”

Some even ask the one question that makes Melanie smile: “They say, ‘Where’s your scar?’”