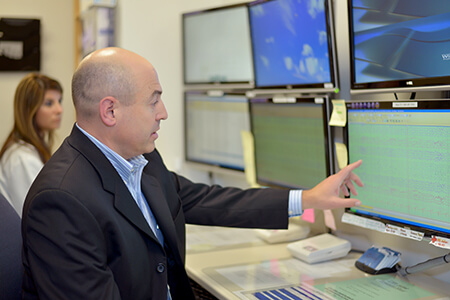 ​At one point, Kristy Mandigo was seeing 15 different specialists. Then she met David Millett, M.D., Ph.D.

Born with right sided hemiplegia and spastic cerebral palsy, Kristy Mandigo was never expected to walk normal, talk normal or graduate from elementary school. She didn’t learn how to read (conventionally) until she was in junior high. She had a great memory, which hid many of her challenges. At the age of 16 she developed seizure disorder. The first seizure was so intense, she could only drink from a sippy cup for days. Her seizures thereafter seemed to intensify with different side-affects.

Today, Kristy is a 34-year-old MBA with an engineering degree who works at Raytheon. She is happily married and is the mother of two healthy young boys – improbable feats Kristy shrugs off: The exceptional is nothing new to her.

Even so, the accomplished and strong-willed Kristy says Dr. Millett stands out as extraordinary.

Born with portions of brain matter missing, and a laundry list of other ailments, Kristy has spent her whole life under the care of specialists on two coasts, including several neurologists and a hematologist. In 2004, another neurologist recommended Dr. Millett.

“I was seeing 15 different specialists. I basically quit them all, and I just see Dr. Millett,” Kristy says. “He somehow knew everything that was wrong with me, and he works with you. He never said, ‘Let me try to fix you.’ His approach is, ‘Let’s see what you want, what you’re willing to take,’ and he started from there.”

The first thing Dr. Millett did was switch Kristy’s medication, which took no small amount of courage on the doctor’s part.

“He had to convince an engineer that I was going to need to take a different drug; you can bet I questioned the living daylights out of him,” says Kristy, who decided to trust Dr. Millett because it became immediately apparent that Dr. Millett trusted her.

“He doesn’t treat you like you’re not intelligent,” she says. “He explains exactly what sector of the brain is having an issue, and what each treatment will do. ‘Just trust me’ never comes out of his mouth.”

The medications have stabilized Kristy's seizures, and have given her a life that may not be conventional, but is one that she and her family are blessed with.

The Los Angeles-based Kristy says she was particularly impressed with how doggedly Dr. Millett worked with her local obstetrician during her pregnancies to coordinate doctors’ visits and minimize repetitive tests.

Working with Dr. Millett, Kristy has a new handle on her health and hopes one day to become a motivational speaker and help others with multiple disabilities to become advocates in the fight to end epilepsy and end cerebral palsy. She is heavily involved in her company’s Diversity boards and conducts outreach to End Epilepsy. She is also working on a book about her life. Wherever her already incredible life journey takes her, there is one thing she knows for sure: Dr. Millett will be a part of it.

“If he moved out of state, I would go to him anyway,” she says. “He makes you feel like you’re the most important patient he has.”