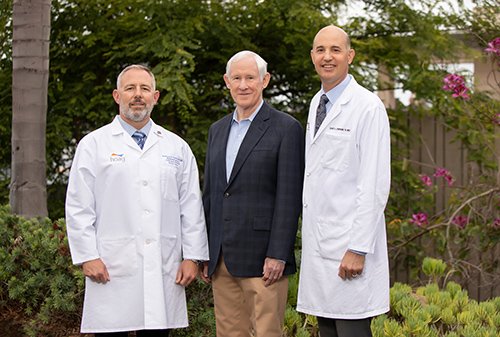 For several years, Mike Barnes was told by internist William Fukuda, M.D. that he had a heart murmur that might later require intervention. Under the advice of Dr. Fukuda, Barnes sought expert input from cardiologist Carey O’Bryan, M.D. to help monitor his heart health. Dr. O’Bryan told him that he had a failing aortic valve that would need replacement in time, so he carefully monitored the progression of his disease.

One day in 2013, the avid cyclist was in the Netherlands, losing his breath and feeling an overwhelming sense of fatigue. Clearly, it was time.

“My wife, who is also a cyclist, made me get off the bike. They took me to the hospital and said you’re not getting on an airplane until we do surgery here,” Barnes said. “I said, ‘No. I’m going to Hoag.’”

Barnes, a retired executive with Rockwell International, spent his career dividing his time between San Antonio, Texas, and Newport Beach. His active lifestyle has taken him around the world – and to more hospitals around the globe than he would have preferred. When it came time to seek treatment for his serious medical condition, Barnes knew that he wanted to be treated at Hoag.

“I had had an experience with Hoag previously and I was impressed by the courtesy, the promptness, the quality of the facilities and the service. I knew I wanted to have the surgery here,” Barnes stated.

Barnes convinced the physicians in the Netherlands to let him fly back to the states, where he connected with Dr. O’Bryan, who referred him to Anthony Caffarelli, M.D., cardiothoracic surgeon, director of Hoag’s Cardiac Surgery Program and the Newkirk Family Endowed Chair in Aortic Care.

“He was somebody I related to quickly. Professional, he talks like a regular guy. I knew I was in good hands,” he said.

In fact, Barnes said that even the morning of the open-heart surgery, he felt calm and confident. The medical staff had done a great job explaining what to expect: Dr. Caffarelli would perform an operation to replace his aortic valve and reverse the dangerous aortic stenosis that prevented his heart valve from closing properly, putting him at risk of death.

Barnes underwent a minimally invasive surgical aortic valve replacement. Rather than opening the chest with one larger incision, Dr. Caffarelli was able to access his heart through smaller incisions on the side of the chest.

The largest volume cardiovascular program in Orange County, Hoag has established itself as a center for innovative and comprehensive cardiac care. “We are a leader in all therapies for aortic valve stenosis, including minimally invasive surgical approaches,” said Dr. Caffarelli. “Hoag’s cardiac surgery program holds the highest rating award by The Society of Thoracic Surgeons for surgical aortic valve replacement, placing us in the top 5% in the country.”

The surgery went well, and recovery was easy, as Barnes remembers it. Even six years post-surgery, Barnes still clearly remembers waking up in a hospital bed with a sweeping view of Lido Island.

“I wake up and I’m on the fifth floor, looking out at the blue ocean and sailboats,” he said. “I felt like, ‘This is Heaven.’”

Today Barnes, 77, is just as active as he was before, cycling and showing no signs of slowing down.

“I was blessed to have good nurses, a top-notch physician team and outstanding hospital on my side. My heart is almost like new,” he said. “Actually, the murmur is gone, so it feels good as new.”