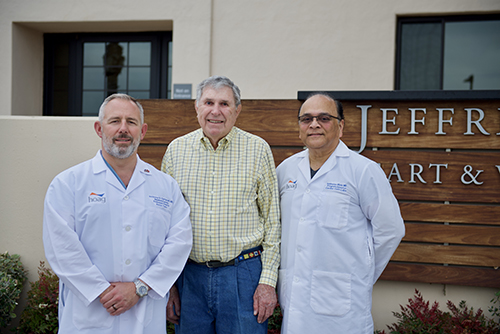 When Robert Blayden thinks about the circumstances of his valve replacement surgery – the timing, the hospital, the physicians – it’s as though the stars aligned.

Robert was part of a clinical trial at Hoag last year to evaluate early treatment with transcatheter aortic valve replacement (TAVR), a minimally invasive procedure, in patients with severe aortic stenosis who are not experiencing symptoms. Traditionally, patients are monitored for disease progression, and if otherwise healthy, are recommended for open heart surgery to replace their aortic valve – which leads to a longer and more arduous recovery period.

For patients like Robert who participated in the study, TAVR took less than an hour and recovery lasted a week. During a TAVR procedure, an artificial valve is inserted via a catheter that is led up to the heart from a small incision in the leg.

“It’s remarkable. It’s non-invasive. You don’t feel hurt or sore. There are no after affects,” he said. “It’s a minor miracle.”

Robert had lived for years with a heart murmur that didn’t seem to impede his lifestyle. But when he switched primary care physicians, his new Hoag Medical Group doctor, Amit Hiteshi, M.D., referred him to Subbarao Myla, M.D., program director of the cardiac catheterization laboratories at Hoag’s Jeffrey M. Carlton Heart & Vascular Institute.

His heart murmur seemed to be worsening. An amateur photographer and avid traveler, Robert and his wife had been active and on-the-go for years. Shortly before the procedure, however, Robert started to experience shortness of breath and fatigue that threatened to slow him down.

“I am fortunate that my primary care doctor referred me to Dr. Myla and that he was aware of TAVR. His skill sets enabled me to go through this procedure,” he said. “I have had a win-win with good medical support.”

Robert is especially grateful that his symptoms didn’t manifest earlier. Since he was participating in the clinical trial he was able to have the unique advantage of quickly receiving a TAVR procedure once he developed symptoms.

“I thought the trial would benefit me because I didn’t like the idea of having a valve replaced by a non-invasive surgical approach,” he said. “I would have resisted it as long as possible.”

In fact, Robert and his wife liked absolutely everyone they came in contact with related to the trial, the procedure and the recovery. They tried to jot down everyone’s names so they wouldn’t forget.

“One thing I have never understood about Hoag: the HR department,” Robert said. “Whatever their secret is, it’s unbelievable. Everyone they hire is a 10-plus. They are the best, the nicest. From the doctors down to the people who come in to clean the room.”

Robert often reminds himself how lucky he was to be part of such an important trial, and the opportunity to receive this innovative care. “I tell everyone I know about the amazing benefits of a less invasive TAVR procedure, and the team that supported me along the way.”