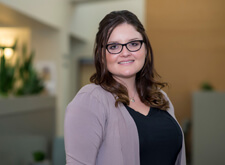 Jillian Rossello wanted everyone to forget that she had been an ER nurse at Hoag.

“Act like I don’t know anything,” she’d tell her doctors and nurses. Because, in the case of her rare form of sarcoma, she really didn’t.

At the age of 28, Rossello was diagnosed with dermatofibrosarcoma protuberans (DFSP), a tumor that grew between the skin and muscle on her right leg and represents about 1% of the already uncommon soft tissue sarcomas. So unusual is a diagnosis of DFSP, that Rossello said her cancer support group’s mascot is the unicorn.

A rare cancer requires a highly specialized oncologist, which Rossello found in Nader A. Nassif, MD, an orthopedic oncologist who has developed an expertise in treating tumors of the soft tissue and bone.

“If Dr. Nassif had not been part of the group, I would have had to leave Orange County” for treatment, Rossello said.

“From the first moment I met him, he said, ‘We’re going to be friends for the next ten years. I’m going to see you get married and have kids,’” Rossello said. “He’s been very reassuring.”

He has also been thorough. After removing “a large chunk” of her thigh, Nassif discovered that Rossello’s tumor was rapidly growing and that the nurse would likely need radiation. Radiation would decrease the likelihood of recurrence from 14% to 5%, but radiation itself could also induce sarcoma. He presented her case to the tumor board, a “meeting of the greatest minds,” as Rossello described it, so she was confident in the treatment choice. Even if she was scared.

“He took the time to let me sit in the office and cry,” she recalled. “But because I know the physicians and the kind of care that you receive at Hoag, I knew that if that’s the recommendation, that’s what you need to do.”

Rossello’s time as an ER nurse at Hoag did not afford her much contact with the radiology team, and the patient said she was very impressed with group. Setting up for radiation therapy takes much longer than actually performing radiation therapy, and the technicians would use that prep time to reassure Rossello, answer her questions and put her at ease.

“The radiation team is all really knowledgeable,” she said. “They were patient and would explain things to me.”

Dr. Nassif walked her through all the steps of her treatment, from the wide excision he was going to make in her leg, to the radiation and physical therapy she would require afterward.

He answered all her questions. Assured her at every step. And when Rossello called late one afternoon complaining about a reaction to her wound dressing, Nassif saw her early the next day.

Dr. Nassif also recommended that Rossello take advantage of Hoag’s Nurse Navigator program. “He said, ‘I know you’re a nurse, but I also know that it’s hard being on the other side.’”

Lori Berberet, an oncology nurse navigator, helped her with paperwork, coordinated her various appointments, called to check in on her and answered any questions that Rossello forgot to ask.

“It was scary going through this patient experience without my nursing helmet,” Rossello said. “Having that personal touch, knowing what your personal situation is, was so helpful.”

Rossello describes her treatment as “amazing.”

“When I was going through this, I wondered if they were giving me better care because I had worked at Hoag,” Rossello said. “But this is really what they do all the time. The whole group, they really do emit that culture of family and caring and compassion.

“They all really took the time and gave me what I needed.”