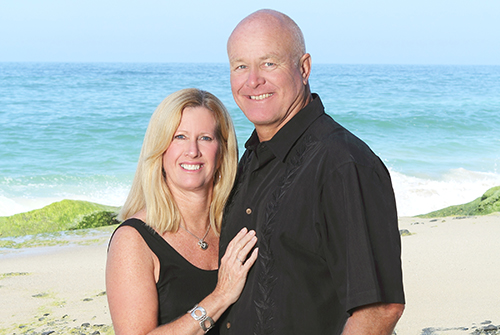 It’s a surprising title. But it is emblematic of Dave’s positive personality and of the incredible care he has received at Hoag.

Diagnosed with aggressive prostate cancer at the age of 58, Dave did exhaustive research into his treatment options, including reading a 300-page book on proton radiation therapy, the treatment his older brother underwent when he was diagnosed with prostate cancer a few years earlier. Dave considered that option for himself before taking what he refers to as a “treatment tour” of three hospitals in Southern California. That’s when he met Jeffrey Yoshida, M.D., Director of the Hoag Urologic Oncology Program and Benjamin and Carmela Du Endowed Chair in Urologic Oncology.

Men of positive energy, faith and humor, Dave and Dr. Yoshida immediately hit it off on a personal level. But it was Dr. Yoshida’s expertise and impressive outcomes that gave Dave the confidence to put his trust in robotic-assisted surgery.

Assessing the risks and side effects of all the prostate cancer treatment options available to him, Dave says he felt robotic-assisted surgery would be the best fit for him. Both his research and his intuition told him that Dr. Yoshida is one of the most trusted and experienced robotic surgeons in the country.

“I had excellent results with everything. There are always potential side effects, like incontinence. I had zero,” Dave says. “Because of the Kegel exercises Dr. Yoshida had me do before surgery, I was completely fine.”

Dave undergoes blood tests every three months to monitor for signs of cancer, and injections have helped him overcome temporary erectile dysfunction issues. He could come in for his blood work or his injections and just go home.

But he’s not done with Hoag.

Using humor and great honesty, Dave helps other men going through treatment combat the fear and anxiety that comes with a prostate cancer diagnosis.

“I go to Hoag’s Prostate Cancer Support Groups whenever I can,” says Dave, who remains cancer-free after two years. “Depression can be a huge part of the disease, but because of my attitude, I have had several patients contact me who feel like it’s the end of the world. I talk to them, and I think it helps them.”

Of course, support groups help him, too. Dave still faces apprehension every three months when he goes in for his blood work. But for a man who dedicated his life to putting out fires, he derives great meaning from extinguishing other men’s fears.

Many of the stories he tells can’t be reprinted here (you’ll have to ask him in person). But one is representative of how a positive attitude can help a person recast a burden into a blessing.

“When you go home after the surgery, you have a catheter. They give you a small bag, that you can strap to your leg to get around with, and then another, bigger bag that you use at night,” Dave says. “I figured out that if I hung the big bag over one side of the recliner, and place a six pack of beer at the other side, I could sit and watch golf for four hours and never have to get up to go to the bathroom.”

Dave says he is naturally positive, but he credits the care he received at Hoag for his “new calling” of helping others through this ordeal.

“The process was very good and easy, and I felt comfortable the entire time. The Hoag nursing staff put up with my stupid jokes,” he says. “So I go to Hoag’s prostate cancer support groups whenever I can. It’s something I feel I can do to help other people through the miserable thing that is prostate cancer.”