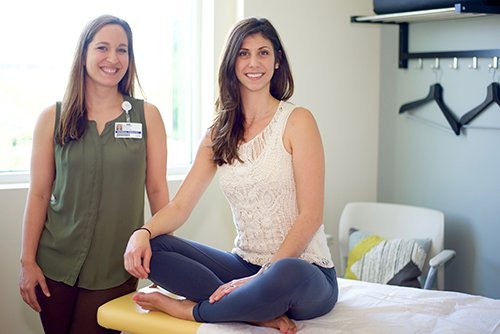 After the birth of her second child, Rachel Peiffer decided to try yoga. During a vigorous vinyasa class, that didn’t pay attention to form, Peiffer unknowingly developed a five-finger Diastasis Recti, or abdominal separation, a common condition of pregnancy and postpartum.

During class, while in the splits, she heard a crack and felt her pelvis drop. Tearing the muscles and cartilage in her right hip.

“Dealing with the pain from my injury hurt me both physically and mentally,” said Peiffer. “Numerous physicians and physical therapists told me they couldn’t help me or that my case was too complicated for them. I felt hopeless.”

After a year of doctor appointments and physical therapy consultations, Peiffer underwent surgery to repair her injuries in Southern California.

Researching options for physical therapy after surgery, Peiffer knew she would need someone who understood the intricacies of her injury from an orthopedic and pelvic health standpoint.

That’s when she found WOMANOLOGY® by Hoag.

Designed by women, for women, WOMANOLOGY’s highly trained, specialized practitioners offer an integrated approach to pelvic floor physical therapy in a relaxing, respectful environment that focuses on optimal patient outcomes. With access to certified Pilates instructors, massage therapists, acupuncturists, a guided imagery therapist, a licensed psychologist, and registered dietician, patients are paired with providers who can supplement their treatment to achieve better results.

Peiffer was introduced to Heather Ackley, PT, DPT, PRPC, whose experience in both orthopedic and pelvic health was a perfect match.

“When I met Heather, she was the first person that I felt actually listened to what I was saying,” said Peiffer. “She listened to my body and for the first time gave me the reassurance that I wasn’t going to have to suffer in silence. ”

Ackley worked with Peiffer to strengthen her pelvic floor muscles and prevent complications.

Living in Northern California, Peiffer returned home and sought to find similar treatment closer to home, but was unable to find the level of care she experienced at WOMANOLOGY.

“Heather went above and beyond by contacting therapists near my home to explain what therapies had been working for me and how to best approach my injury,” Peiffer said. “I still found that no one else was able to compare to the competent, compassionate and personalized care I found at Hoag.”

Today, Peiffer flies from San Jose to Orange County every week for an appointment at WOMANOLOGY.

An active mom of two, Peiffer makes her health a priority because when she sticks to her therapy routine she can feel a difference in her overall well-being.

“I know that I’m healing when I’m with Heather,” said Peiffer. “The team at WOMANOLOGY makes me feel at home and gives me the confidence that I will get back to my healthiest self.”