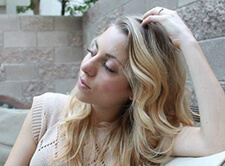 Samantha Estock was just 12-years-old when the seizures began. Sometimes they’d come in rapid succession – as many as three per minute. Sometimes she’d get as many as 200 seizures in one day.

The seizures sapped her energy, and dramatically altered her life but Samantha said they also made her a more compassionate person. The 23-year-old writer noted a kindred sense of compassion in David Millett, M.D., Ph.D., Epilepsy Program Director at Hoag Neurosciences Institute.

Estock found Dr. Millett by chance. She moved to Orange County from the Bay Area two years ago without knowing much about the medical landscape here. When her first local neurologist retired, Samantha needed to find a new doctor quickly.

“I heard a lot of good things about Hoag. So I went to see Dr. Millett. Right away, he was super nice and super smart,” said Samantha, of Westminster.

At 5-feet and 100 pounds, the diminutive Samantha is not a typical patient. She reacts poorly to most of the strong medications she’s taken – all 27 of them. This has made treating her too complicated for some physicians, she said. But Dr. Millett has been up for the challenge.

In fact, the first medication regimen Dr. Millett recommended controlled Samantha’s seizures but caused severe depression. Prior physicians had made Samantha feel guilty for asking to change her prescription, but Dr. Millett immediately responded to her needs and switched course.

In place of her existing regimen, Dr. Millett prescribed medications that have worked on Samantha in the past, but that made her sleepy. Unlike the other doctors he was the first neurologist to recommend taking those drugs only at night.

“I don’t know why nobody else thought of that,” she said. “I can smile again, I’m not a zombie. He really got it. He really understood.”

Samantha is studying to become a chaplain so that she can offer the same kind of help and hope she experienced from chaplains during her many hospital stays as a teenager in the Bay Area. She marvels at the kindness that Dr. Millett has shown, something she hadn’t previously experienced from her doctors.

“He’s really funny and nice. He takes his time with you, and he really cares. His attitude is always, ‘Let’s fix this.’”