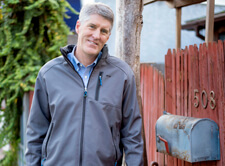 Undergoing treatment for melanoma is far from a “positive experience,” but those are the first words David Hartshorne uses when he discusses the care he received at Hoag.

“When you hear the ‘cancer’ word, it’s daunting. But I was referred to Dr. [Burton] Eisenberg at Hoag, and on my initial visit I also met [nurse navigator] Lori Berberet. They were amazing,” said Hartshorne, 56. “I had a great outcome, but I know that even if I didn’t, I still would feel the same way: I was so grateful to have such a positive experience working with Hoag.”

From the speed of his diagnosis to the availability and professionalism of the entire medical staff, Hartshorne says he felt Hoag’s treatment plan was designed not only to rid him of potentially life-threatening cancer, but also to comfort him.

The retired Irvine business consultant, said previous experiences with other medical facilities in the area did not prepare him for the level of personalized attention he received at Hoag. Nurse navigator Lori Berberet, R.N., M.S., , coordinated all his care between specialists, called to check in on him several times and talked to him on a personal level that put him and his wife, Sherry, at ease. Hartshorne said the anesthesiology and radiology staff were capable and professional, making him feel he was in good hands. And the physicians were available and engaged in a way he had not expected.

“It was amazing because I knew who he was, and I didn’t expect that he would be my physician,” Hartshorne said. “At first, I thought I’d be handed off to someone else – that he might be familiar with my case, but that was it. I was surprised that he was the one doing the surgery. During both the pre-surgery consultation and post he was there, he was engaged. I felt really blessed to have those folks in my corner.”

Hartshorne said the care he received was something the associates with large academic medical centers on the East Coast would receive, “World-class health care and very personalized approach, to have that locally at Hoag, it blew me away.”

Dr. Eisenberg made a 4-inch incision into Hartshorne’s shoulder and removed a few lymph nodes to test whether the cancer had spread. Melanoma is the most serious type of skin cancer. It can be aggressive and fast-moving, but Hartshorne’s cancer seemed to be contained.

Hartshorne now follows up with his dermatologist quarterly, as melanoma is known to reappear. While he told Dr. Eisenberg recently “I hope I never meet you professionally again,” Hartshorne said he knows that should something arise, capable hands will help him through.

“I couldn’t have found a more qualified team.”