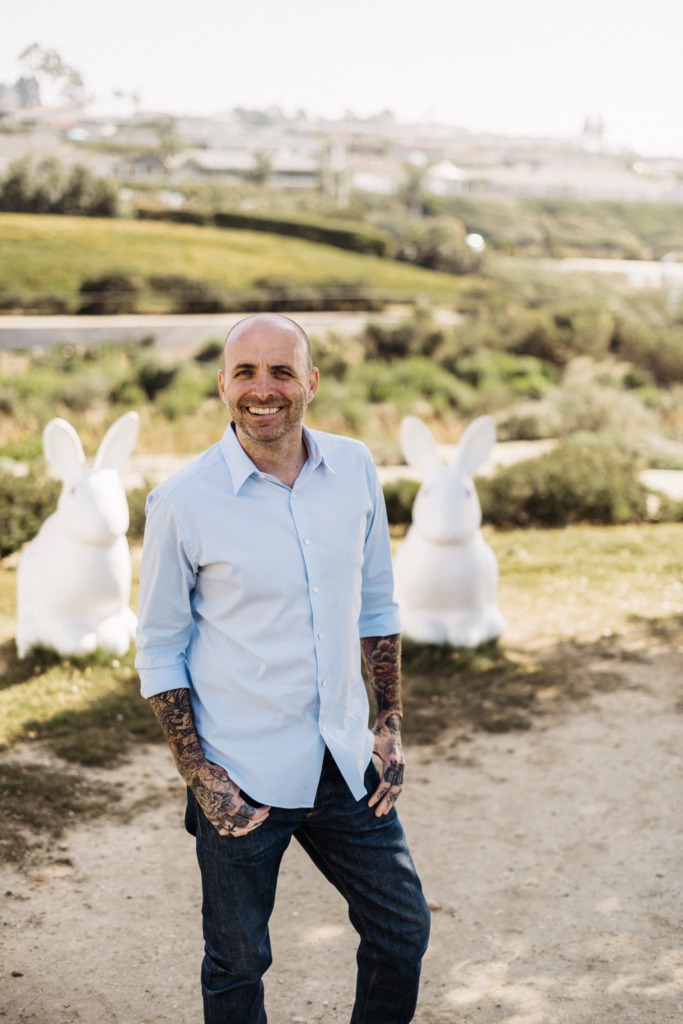 Jason Maloney thought he was going to the ER with the stomach flu. Instead, he found himself on a journey that has included three hospital admissions, eight visits to the ER, biologic infusions, the surgical removal of 12 inches of his intestines and a surprise diagnosis of Crohn’s disease.

Jason’s Crohn’s disease had been misdiagnosed for as long as 20 years, a delay that nearly killed him. Crohn’s disease, a chronic inflammatory condition affecting the gastrointestinal tract, can look like other conditions, and as he talks to more people about his disease, Jason is learning that misdiagnosis and undertreatment are fairly common.

The Orange County artist said he wants to share his story to help other people from going undiagnosed for too long – and to say “thank you” to the hospital and medical team that uncovered his disease and have made a commitment to his care.

“It’s lucky that I’m alive,” he said. “With Dr. Caroline Hwang, I feel like I have the best of the best on my team. By bringing her in and starting a great program for Crohn’s disease, Hoag is showing me as a patient that they’re investing in me getting better.”

Before 2018, Jason said the only time he had ever been in a hospital was “when I was born.” Throughout his childhood, he experienced some mild stomach cramping, but wrote it off as nerves, or something he ate so he adjusted his diet accordingly.

By the time he was in his late 20s, his symptoms became severe enough that Jason sought help from a gastroenterologist. The doctor asked if he had blood in his stool, but he didn’t explain to Jason that blood might not appear bright red. Without that context, Jason said, ‘no,’ leading the doctor to think that nothing was wrong. He didn’t offer any further testing, was told to eat more fiber and Jason was sent on his way without any answers.

In his early-40s, Jason started to experience stomach flu-like symptoms every few months. He could hear his food go through his system; he would grow pale and start vomiting. On July 4th, 2018, those familiar symptoms took another turn.

“Out of nowhere, I started shaking so badly, I couldn’t even hold the phone,” he said. “I was scared. Everything in me said, ‘Go to the hospital. I took two Tylenol and jumped into the car. I just looked at the flagpole at top of Hoag and told myself, ‘I just have to get there.’”

The instant an ER nurse saw him, Jason was ushered to a room.

Jason spent a week at the hospital recovering from sepsis and undergoing a battery of tests. It was there that a CT scan revealed Jason’s inflamed ileum, which pointed to Crohn’s disease. Crohn’s is typically diagnosed before the age of 30, and Jason was 43. But his doctors still recommended that he see gastroenterologist Victor Yu, M.D.

“I was navigating a world that was totally new to me,” Jason said. “A week after I got out of the hospital, I went to see Dr. Yu, and right away he said, ‘I think you have Crohn’s.”

Through multiple tests, including an endoscopy & colonoscopy with biopsies and a special Prometheus Labs blood test, Jason’s diagnosis was confirmed, and he was able to begin biologic treatments. Biologic therapies work by blocking certain chemicals that cause inflammation in the intestines. The idea was to try to prevent Jason from needing surgery, but Jason’s condition was already fairly advanced by then.

“It was like throwing a water balloon on a forest fire,” he said.

Jason said he was impressed by the way the Hoag gastroenterologists including Dr. Yu advocated for me, pushing surgeons to address Jason’s case quickly. Nurse navigator Jamie Vincent, B.S.N., R.N., helped him to coordinate his care and to fill out the paperwork he would need in what became a yearlong process to gain control of the disease.

“I couldn’t work constantly for about a year,” said Jason, who is an artist and freelance designer for major corporations. “You think you just have the stomach flu and all of a sudden you’re on infusions and having surgery.”

The surgery seemed to correct Jason’s problems. But Crohn’s can return at any time, and 5 months later, his symptoms were back. It was clear Jason was going to need more advanced care. Thankfully, Hoag had recently hired Crohn’s disease expert Caroline Hwang, M.D., Director of the Hoag Margolis Family Inflammatory Bowel Disease Program.

“Dr. Yu referred me to Dr. Hwang. She’s super warm, and with her on my team, I feel like this is really manageable,” he said.

With her expertise and experience, Dr. Hwang was able to recommend a treatment course appropriate for Jason’s aggressive form of Crohn’s that included a specific diet along with combination drug therapy. The regimen seems to be working, and Jason said he is grateful to have a world-class team in his backyard.

“I feel like I have the best on my team,” Jason said. “I feel confident in her and in Hoag. Having Dr. Hwang and Dr. Yu, signals to me that Hoag is investing in the care of people in Orange County who have Crohn’s. It’s an opportunity for Hoag to help a lot of people.”