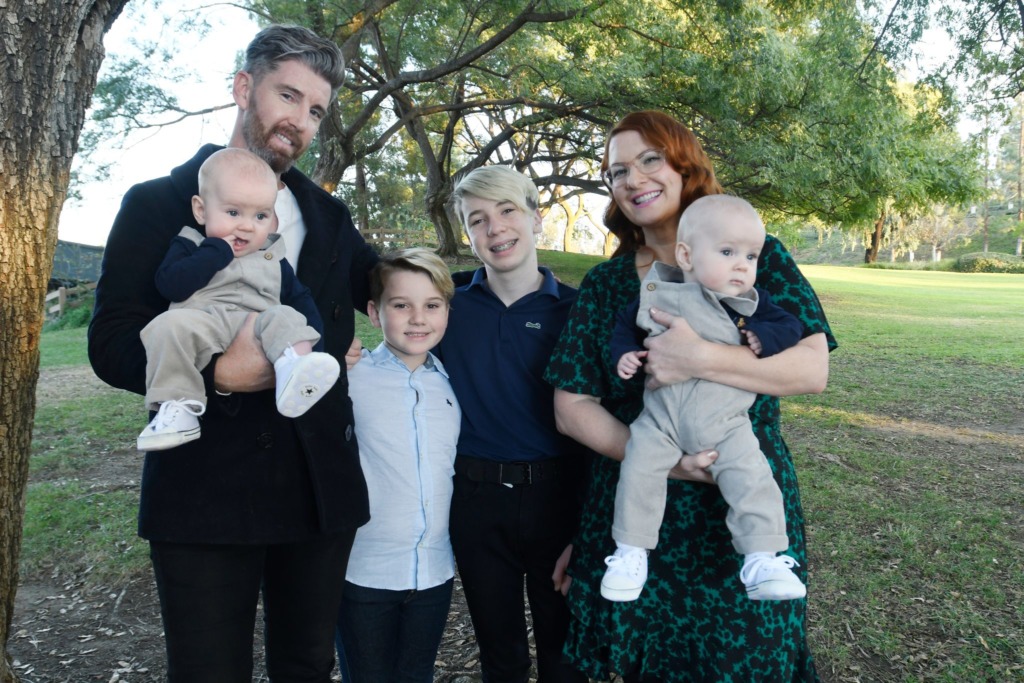 At 31-weeks of pregnancy, Trisha Barry suffered a broken rib and dangerous pre-eclampsia. The twins she carried were in jeopardy and so was her life. She had no choice but to be hospitalized for the duration of her pregnancy.

It was difficult, but at least her older boys, Jude and Ezra, who were 8 and 12 at the time, could come and visit her in the hospital. Her husband came daily, as did other friends and family. That was February.

“Then, because of COVID, slowly things started shutting down,” Trisha said. “I missed my two older boys, they couldn’t come visit anymore, and they each had a birthday while I was in the hospital. My husband did a good job keeping me connected through FaceTime with them, but it was sad.”

The daily walks Trisha had been taking outside the hospital were limited to walks around the hospital floor – until even those were curtailed entirely. Tuesday support group meetings for hospitalized expectant mothers were canceled. Everyone has experienced the COVID-19 pandemic differently. For Trisha, the disease shrunk her big, social, family-filled world down to an isolated hospital bed.

The experience could have been heartbreakingly lonely. But, Trisha said, the people at Hoag made it deeply meaningful instead. OB/Gyn Jennifer Broad, M.D., checked on her every weekday morning, spending time to answer her questions and listening to her concerns. And many of Trisha’s nurses visited with her the way friends or family would.

“I really felt cared for,” Trisha said. “The nurses would listen to me. They would cry with me. They would tell me their stories, too. What was going on in their families and things that they were missing out on. It felt like I was talking to friends. They made me feel like I was family and not somebody they were just checking off a list.”

During the six weeks Trisha spent at Hoag before her delivery, the kindness she experienced was immeasurable. But one situation stands out.

“It was the first couple days after lockdown. I felt like my phone was my only connection to the outside world. I went to take a shower, and I left my phone in the bed, I don’t know how I didn’t put on the table,” she said. “A nurse came and changed my sheets for me but didn’t realize my phone was there. By the time I realized where my phone was, the sheets had gone out to the laundry facility. I can’t imagine how much laundry is going out there. My nurse kept calling and checking, she didn’t stop until they found it. They next day, they brought the phone back, and it was still working.”

That drive to go above and beyond impressed Trisha deeply, and she said she saw it in everyone at Hoag – from the people at the Labor and Delivery ER who checked her in to the cleaning crew to the nurses to Dr. Broad, who helped Trisha make it to 37 weeks of pregnancy.

“I was trying to avoid a C-section, and Dr. Broad knew that. My twins were not positioned correctly, but Dr. Broad offered to do ultrasound minutes before surgery, just to check and see if [a vaginal delivery] was possible,” she said, “In the end, we did a C-section, and it went smoothly. The anesthesiologist sat behind me and was comforting in the way he spoke to me. Everyone took great care of me.”

Karis Ireland and Kieran Imago Dei Barry were born on April 9 to the sounds of church music from Trisha’s playlist. The twin boys were healthy, coming into a world filled with loving faces that had been awaiting their arrival as eagerly as family.

In the three days after the twins’ arrival, Trisha said she started to see new faces in her hospital room. Regina Scott and Caitriona Finn, lactation consultants, gave her the support and encouragement to breastfeed her twins. And familiar faces showed up, too.

“Dr. Broad visited me in the Mother Baby Unit twice after delivery. I know neither of the doctors who delivered my previous children did that, and I’m pretty sure that is rare. She’s so special, and I think the world needs more doctors like her,” Trisha said.

Several of the nurses from Trisha’s nearly two-month stay visited her and her newborns as well.

“They left such a mark on my soul,” Trisha said of the nurses. “It has made me want to give back in some way. I want to do something where I can help women also. With all the chaos going on in the world, these women offered me a piece of heaven on earth with all their compassion and thoughtful care. What could have been a depressing stay due to the isolation was turned into a positive one and a memory that I actually look back on fondly and with tons of gratitude.”

Trisha said that after her babies were born, she and her husband looked out of the hospital window and saw a double rainbow, right over where their newborns were sleeping.

“With all the tumult going on in the world, it felt like we were tucked away in this safe little place.”