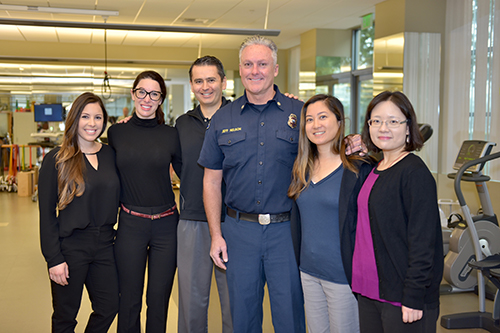 After more than two decades as a Huntington Beach firefighter and a paramedic, Jeff Nelson was familiar with Hoag. He has rushed countless people to the hospital. People who have suffered accidents, heart attacks and strokes.

But none of that prepared Jeff to be the one on the gurney.

Ten years ago, while training for a marathon, Jeff passed out in the shower and was transported to Hoag for evaluation. The doctors discovered he had an arteriovenous malformation (AVM), an abnormality in the blood vessels connecting his arteries and veins. Radiation treatments and surgery followed, but Jeff knew he wasn’t out of the woods.

During the last decade, doctors routinely monitored Jeff, analyzing the effectiveness of the treatment he had received, and suggesting that he would likely need more aggressive intervention down the line.

The day came on February 19, 2017. Jeff was at work at the Huntington Beach Fire Department when he began to have stroke-like symptoms. The crew recognized his symptoms and transported him to Hoag, where he was stabilized.

He later underwent surgery at a hospital in Los Angeles that alleviated the AVM, but Jeff suffered a massive hemorrhagic bleed and subsequent stroke that left the right side of his body limp.

“After four days, they started waking me up. I knew immediately that something bad had happened,” he said.

Jeff remained at the hospital in Los Angeles for five weeks until he could regain his strength enough to return home.

“My goal was to get home to see my oldest child graduate from high school,” he said.

“When I came back to Huntington Beach I worked hard with the team at Hoag. Physical therapy, occupational therapy and speech therapy, twice a week for more than six hours per week. I would do duplicate workouts at home.”

The road was hard, but Jeff was determined. Recognizing his drive, the Outpatient Rehabilitation team at Hoag pushed Jeff to achieve his goals. And then some.

“The staff is so skilled and encouraging and helpful. They would challenge me. They were very motivating,” he said. “They became like a second family because I spent so many hours with them.”

When he first came to Hoag, Jeff was able to transfer from his wheelchair to his feet, speak and do basic tasks. But walking, fine motor skills and even thinking clearly were difficult.

“I had a sense of pain or heat all the way down from my head to my right foot,” he said. “I could stand up, and I could take tiny steps with assistance. But I was very limited in terms of mobility and endurance. I would be exhausted after 10 minutes of talking.

“My [rehab] appointments allowed me to be challenged each and every day through the grueling and frustrating things they would put me through. And I asked for homework every day,” he said. “So, it was like double the workout. I worked out at Hoag and at home. I wanted my life back, and they kept challenging me and pushing me.”

After he used all the rehabilitation hours allotted to him by his insurance, Jeff continued to work out at home, improving his strength, confidence and mobility – and lifting others up in the process. Whenever someone at Hoag’s outpatient rehabilitation facility is in need of support, the staff knows they can reach out to Jeff.

“I talk to people and try to encourage them,” he said. “I think that’s what I’ve learned out of this, to encourage others and lift people up.”

The emotional piece of it is especially important, Jeff said.

“Emotionally I had a tough time about halfway through it. You start to think, ‘What is your life going to look like?’ You sink into a dark place,” he said. “Emotionally there were needs that I didn’t realize needed to be addressed, but the team here recognized it. I was able to talk to someone and validate my concerns, feelings and emotions. That was the second wind I needed to get back.”

After 479 days, Jeff returned to his post as fire captain at the Huntington Beach Fire Dept. He’s even back to wakeboarding and swimming.

“With a lot of hard work, and a lot of questions and doubts, I was able to come back,” he said. “I have a huge amount of gratitude and appreciation.”

Having spent time at Hoag’s rehabilitation gym both as a patient and as a supporter, Jeff knows that his outcome is uncommon.

“People ask me, ‘How did you do it?’ And I always say, ‘Faith, family, friends and a lot of hard work,” he said. “Hoag bought in and really pushed me. I’m still getting better.”

Now that he’s back to saving others, Jeff said his experience informs everything he does.

“I always thought I was compassionate, but being on this side of it, I can identify with patients better,” he said. “It’s very scary for the person having the medical issue. I have a different perspective now.”

He also has a new perspective on Hoag. He’s always trusted the hospital: all three of his children were born here, and he’s had a few surgeries and procedures at Hoag over the years.

But now his appreciation runs deeper.

“This is where you bring your loved one,” he said. “We had a suspected stroke patient yesterday at work and brought her here. Hoag is fully capable. This is the gold standard.”