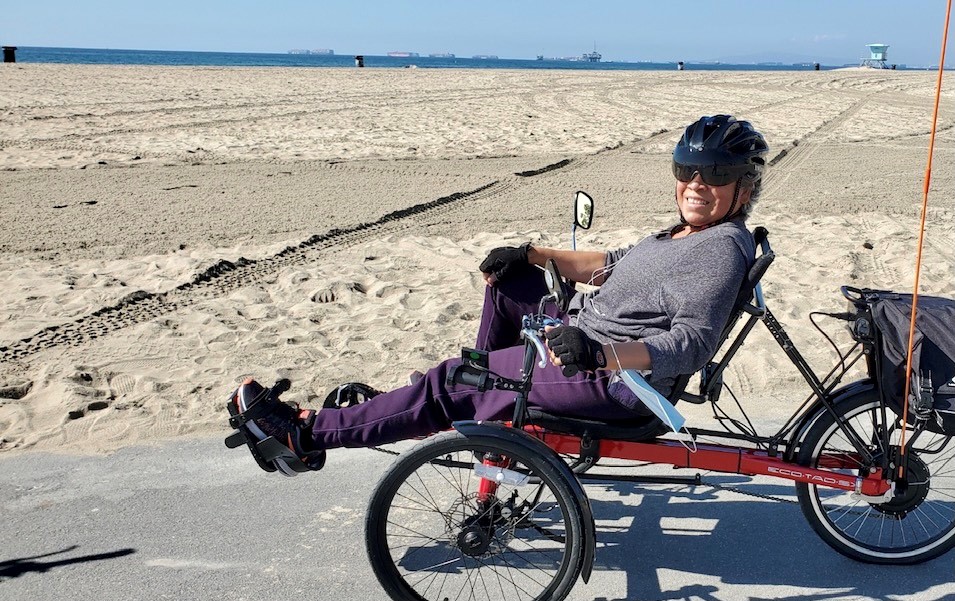 “I was blessed to come to Hoag,” she said. “Dr. Baker has been so kind. He listened. He didn’t rush me. I appreciated that. All my doctors at Hoag have been really good.”

In February 2019, Josie Smith started seeing double and developed an earache and toothache. She thought little of it but scheduled an appointment with her dentist.

“I never made it to that appointment,” she said. “I ended up in the ER. It wasn’t my tooth. I had had my first of two strokes.”

During her assessment for a bleed into her brain, the stroke specialists at Hoag’s Pickup Family Neurosciences Institute discovered multiple, unruptured brain aneurysms. These could rupture, leaving her in a precarious situation. Smith was referred to interventional neuroradiologist Christopher B. Baker, M.D., who performed three aneurysm surgeries over the past year that she said has saved her life.

Aneurysms are outpouchings from the weakened, thinned out wall of an artery, and thus prone to rupture. Such an event is lethal in the majority who suffer it.

“I was blessed to come to Hoag,” said Smith. “Dr. Baker has been so kind. He listened. He didn’t rush me. I appreciated that. All my doctors at Hoag have been really good.”

Smith was in disbelief that this situation was happening to her. She credits the nurses and medical team at the hospital for helping her to both recover and to accept that this dramatic medical event had happened to her.

“A lot of doctors and nurses came into the room and I kept thinking, ‘They’re not talking to me, they must be talking to somebody else.’ I was in disbelief that this was my reality,” she said. “Not only did they calmly and thoroughly explain the situation, but the nurses were really kind in explaining the medication and why I was getting it. I appreciated them doing that.”

Smith said the road to recovery has been long, but that she’s grateful. She still experiences double-vision and numbness on her right side. The numbness has caused her to favor her left side, sending her hips out of alignment.

“It altered my social life. I used to do half-marathons, I’d play pickleball, cycle, go hiking and walking. Now, I can barely walk. But I walk on my treadmill, and I’m getting stronger,” she said. “My goal is to be able to hike again.”

To help her achieve her goal, Smith received physical therapy at the Fudge Family Acute Rehabilitation Center at Hoag. She also attends support groups to hear from others going through stroke recovery.

“They have great resources, and getting out and being social is really nice,” Smith said. “It has been virtual right now, but it’s important for people with stroke to not isolate themselves.”

Smith found a few people who experienced the same type of stroke that she did through Hoag’s Stroke Support Group. She’s followed up with them virtually during the pandemic to see how they’re doing. Based on what she now knows about strokes, Smith said she feels lucky.

“The neurologic ophthalmologist gave me a prism I wear on my glasses that straightens my sight,” she said. “I still have a gait challenge with balancing, stiffness and tightness. But those are getting better. It’s all getting better.”