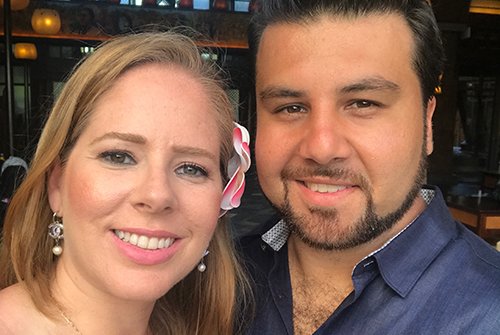 Some of her family members didn’t understand at the time, and some still don’t. But Somaya Ishaq understood what was at stake – and what she wanted to do – when she learned she was a carrier for the BRCA2 genetic mutation, which puts her at an elevated risk of breast and ovarian cancer.

“I had a gut feeling,” says Somaya, a young mother of two daughters who pushed her insurance to cover genetic testing. At the age of 35, she opted for a preventative hysterectomy with removal of her Fallopian tubes and ovaries. “It hit me really hard. I don’t know how people take it when they find out they have cancer, but finding out I have an elevated risk was hard. I have a 2- and 4-year-old. It was difficult to take.”

In addition to the preventative hysterectomy and removal of her tubes and ovaries, Somaya plans to undergo a double mastectomy in the future. Taking ownership of her health puts Somaya in the company of a growing community of “previvors” whose decisions often get second-guessed.

“People don’t know what the BRCA gene mutation is, so some members of my family were saying, ‘Why would you go this far? Why would you have a hysterectomy?’” Somaya said. “My biggest supporters are my husband, my mother and my mother-in-law. They cheered me on. Other people in my family have said, ‘This is nonsense.’”

That is why Somaya says she is so grateful for Hoag’s unique program.

“Going into a place like this makes me feel loved because they really care, and it gives me that peace of mind that these people understand,” she said. “I’m not alone.”

The BRCA2 mutation elevates a woman’s lifetime risk of developing breast cancer to as high as 70% and ovarian cancer to as high as 20%. By opting for preventative surgery, Somaya is at low risk for ovarian or tubal cancer, and reduces her risk of breast cancer by about 50%. Additionally, most young women like Somaya are able to safely take replacement estrogen to avoid symptoms from early menopause. One in 400 people are estimated to have the BRCA1 or BRCA2 mutation, but many in the community don’t have the support, guidance and resources that Hoag offers to help women lower their risk and prevent cancer.

“I don’t even know how to describe how grateful I am for these doctors,” she said.

Somaya said she appreciates how Hoag’s program recognizes that previvors like her often get lost in the cracks. They don’t have cancer, but they need the same kind of surveillance and support as those who are. In addition to the BRCA2 gene, Somaya’s family history puts her at high risk; both her mother, her aunt and her cousin have had breast or ovarian cancer. None of them had the support that Hoag has been able to provide to Somaya.

“My aunt is a 20-year survivor, and when she came with me she was so impressed, so enthusiastic about the program,” Somaya said. “She said she wished it were around 20 years ago.”

Somaya said having all the specialists and equipment in the same location alleviates a lot of the stress that waiting and running around would add to an already tense situation. Both Heather Macdonald, M.D., F.A.C.O.G, breast surgical oncologist and medical director of the Breast & Ovarian Cancer Prevention Program, and Lisa Abaid, M.D., gynecologic oncologist and co-director the program, were able to sit with Somaya at the same time to discuss her options.

“Everything is accessible. I came in for an MRI result and both Drs. Macdonald and Abaid sat me down and told me they saw something, they walked me down the hall to do mammogram and walked me over to do something else. They didn’t just hand me a piece of paper and say, ‘Go do this lab now somewhere else.’”

Somaya also appreciates how the program takes a holistic approach to previvorship.

“I’ve done the yoga, the wellness programs, I’ve seen the psychologist there. There’s a lot there that’s offered in one building that makes it so helpful,” she said. “If you tell me to go do my blood work, I would have never done it on my own.”

Somaya opted to wait until after her 40th birthday to undergo a mastectomy, so her doctors are closely monitoring her to check for signs of cancer. Now when she is confronted by questioning relatives, Somaya feels more supported in her decisions to take control of her health.

“People don’t understand the whole situation. It’s a taboo to discuss, especially with our culture,” she said. “My goal is to live to see my daughters finish college and get married. Now I feel confident that I’ll reach my goal. Hoag is there to help me.”