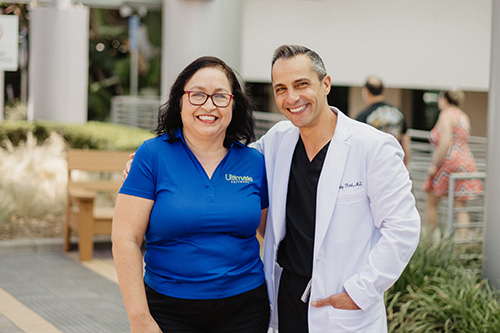 When Virginia Koury gets nervous, she starts talking. “Rambling,” as she calls it, usually “about nothing.”

It didn’t take Babak Rad, M.D., program director for Hoag Colorectal Cancer Program, or Minh Nguyen M.D., medical oncologist, long to learn this about their patient. The two doctors did what the world’s best doctors do when patients are facing stage 3 colorectal cancer with a high risk of metastasis and recurrence: They listened.

“Dr. Rad and Dr. Nguyen were very good for me. Sometimes they were like therapists. I would go to the dark side, asking, ‘What if this doesn’t work? What if it fails? What if the chemo isn’t the right one?’” said Virginia, who had a 4-year-old at the time. “Both of them were very positive, reassuring me that if it doesn’t work, they’ll try something else. They were always patient with me when I was rambling. I always left my appointments feeling positive.”

Virginia said Hoag Family Cancer Institute’s reputation as the leading medical center in Orange County led her to Hoag. And while she knows that she received expert treatment with the most state-of-the-art robotic surgical techniques in the nation, that’s not the first thing she thinks of when she thinks of the care she received.

The first thing she thinks of is the listening.

Colorectal cancer is scary, claiming more than 52,000 lives a year. When Virginia began radiation and chemotherapy treatments, they were rough. And when she discussed the possibility that an 8-hour complicated surgery might be the best treatment plan for her, the information was a lot to take. But the compassion and understanding Virginia received from every member of her medical team helped buoy her through the worst of it.

“Everyone was kind and understanding,” she said. “Dr. Rad has always been conscious and sympathetic of my condition. His caring attitude showed he really wanted to help me. I think this is true for all of his patients.”

Dr. Rad is also dual board certified in general and colorectal surgery, is a member of the American Society of Colon and Rectal Surgeons and has extensive expertise in performing minimally invasive robotic surgery.

When discussing her options, Dr. Rad explained that surgery would help to ensure that her cancer would not return.

“It was my decision to go ahead with the surgery,” she said. “I wanted to make sure the cancer was gone.”

Using the specialized da Vinci robot, Dr. Rad removed Virginia’s rectum and more than 30 lymph nodes. This meant that Virginia would be required to wear an ileostomy bag for nine months.

“I wasn’t thrilled about wearing the bag afterwards, but as long as I was cancer-free I was open to that,” she said.

Virginia remained hospitalized for a week following her surgery, during which she said she marveled that she was never uncomfortable.

“The staff was really good. Very attentive. They explained everything, which is good because you have to rely on them. The bag was difficult to get used to, but they helped me figure it out,” she said. “I remember not being uncomfortable. I had pillows, which made it comfortable. I was up walking around the second day.”

Recovery from a surgery like this can leave patients feeling vulnerable and physically weak. Virginia said that the nurses, doctors and medical staff made sure that she got out of bed and walked as much as she could to keep her strength up. They were kind, and they made her feel supported.

“I felt like a newborn baby, but they were very insistent in a nice way to keep me getting up, explaining that getting out of bed is a good thing for my recovery,” she said.

After nine months, Virginia was able to remove the ileostomy bag. Today, she is 6 ½ years cancer-free. She plans to celebrate her seventh year of post-cancer health by attending Paul McCartney and Queen concerts.

The enormity of a journey that took her from stage 3 colorectal cancer to rocking out at stadium concerts is not lost on Virginia.

“I feel very lucky,” Virginia said. “Everyone at Hoag was just awesome.”

She now plans to put her talkative nature to use to help others. She has joined online discussion groups and is working within several cancer networks to raise awareness of colorectal cancer.

“I realize how blessed I am to be alive. I am now dealing with my past cancer experiences by helping others,” she said. “This is the year for me!”