Home > Patient Stories > Getting to the Heart of it: Aortic Conditions the Focus of Hoag 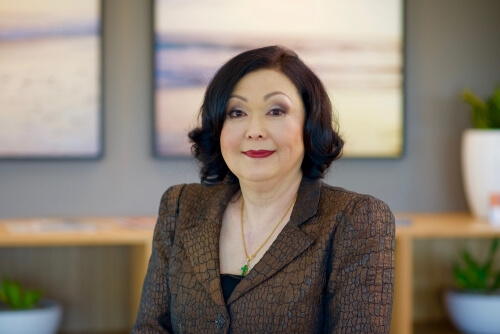 Danniena (Danni) Sun thought she was too young to need major heart surgery.

In 2013, Sun experienced an episode of chest pain and visited Hoag’s emergency department. As part of her work-up, she received a coronary CT scan, which uncovered a thoracic aortic aneurysm – a bulge in the wall of her aorta, the largest blood vessel in the body. Left untreated or if not followed by a physician, a thoracic aortic aneurysm can result in an aortic dissection – a tear in the aortic wall, potentially diverting blood flow away from vital organs, such as the brain.

“Danni was very lucky to have discovered her aneurysm before it became an emergency situation, explained Anthony Caffarelli, M.D., director of Hoag’s Aortic Center and Hoag Cardiovascular Surgery. “In Danni’s case, surgery was the next step, to intervene before the aneurysm dissected. We wanted to be proactive with treatment based on very subtle changes in her imaging studies.”

However, Sun was apprehensive about the procedure and the months of recovery and rehabilitation that would follow.

“I felt I was too young for such a drastic diagnosis so I got a second opinion,” Sun said.

Sun visited another hospital where a cardiologist shared her view and suggested she make a lifestyle overhaul to manage her condition.

“That doctor confirmed that I was too young and he said I didn’t have to worry about it,” Sun said.

About a year later, Sun was at home when she suddenly collapsed. 911 was called.

She was taken to Hoag where an experienced multidisciplinary team was quickly deployed. Sun’s aorta had dissected, cutting off the blood flow to the rest of her body and, most importantly, her brain.

After four days of intensive care and monitoring, Sun woke surrounded by her family and doctors who explained the ordeal she had just survived.

“It’s amazing,” she said. “Few survive the procedure I went through and I have Dr. Caffarelli and the expert team at Hoag to thank. I am so lucky Hoag is my hospital. Not every hospital can do what they did to save me.”

Sun’s nearly fatal ordeal vividly illustrates how expertise and experience can save a life when minutes matter.

“In emergency cases, there is a very short time frame we have to work in to not only save a patient’s life, but also to prevent brain damage. This treatment is very labor-intensive, very specialized,” Dr. Caffarelli said. “This is why we have a dedicated team working around the clock to handle these kinds of emergencies.”