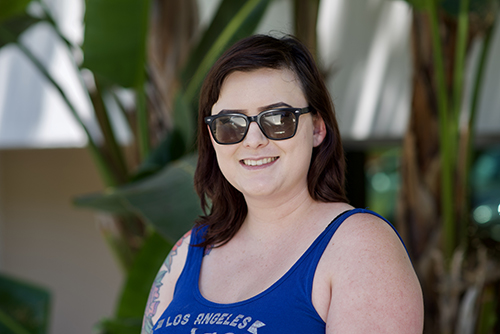 Of all the ways Mehgan Hansen was hoping to spend her 23rd birthday, getting into a car accident and then finding out, via MRI, that she had a tumor on her thyroid was firmly at the bottom of the list.

“I was a mess. It was really scary,” says Mehgan, who suffered back and neck injuries when her car was struck by a driver running a red light. Mehgan’s sister also suffered broken bones in the accident, but nobody was seriously injured.

While it was terrifying at the time, Mehgan says she now sees her car accident as an important “birthday gift,” in that it showed her that her health was at risk and that there was something incredible she could do about it.

Though her biopsy was inclusive and doctors felt her probability of having cancer was low, Mehgan didn’t want to take any chances. She opted to undergo a thyroidectomy, a procedure to remove the thyroid via an incision in the neck. The traditional approach usually leaves a permanent, visible scar.

Michael Demeure, M.D., told Mehgan about endoscopic transoral thyroidectomy, a new minimally invasive procedure in which surgeons remove all or part of the thyroid gland via three small incisions inside the patient’s mouth, under the lower lip. Unlike traditional thyroidectomies, this new procedure leaves no visible scar.

“I had never had a surgery before, not even to take my wisdom teeth out,” she says. “This turn of events, the accident, introduced a lot of ‘firsts’ for me.

“For me, it’s exciting to be a part of something new and groundbreaking,” Mehgan says. “I healed up great, and it was a speedy recovery. Because of the accident, there was a lot of healing going on, but for the thyroid, it only took two weeks to heal. There was no infection and no visible scar.”

The lack of scar was particularly appealing to Mehgan.

“I think a lot of people would be interested in having this specific surgery,” she says, particularly younger people like herself who want to avoid permanent scars. Because it is a more minimally invasive procedure than traditional thyroidectomies, this new approach may also allow for a quicker recovery.

Following the surgery, Demeure confirmed that Mehgan did not have cancer, and therefore, did not need follow-up cancer treatment. She was relieved by the news, and she says the surgery also lifted feelings of fatigue that dogged her before her car accident. She is now inspired to encourage more people, particularly women, to learn about the prevalence of thyroid issues.

“Even before the accident, I was feeling groggy and fuzzy. I realize now that I had thyroid issues, and so many women have issues and don’t even know about it,” she says. “This has been helping me spread awareness and will hopefully help people identify their own thyroid issues. I feel so much better now, it’s night and day.”

Mehgan credits the surgery with her improved health and the nurses and medical staff at Hoag with helping through a frightening period in her life.

“Even though I knew the probability was low, just hearing that it could be cancer was scary. But I knew I was in good hands,” Mehgan says. “Dr. Demeure is very understanding and knowledgeable. He made me feel better about all of it. And the nurses went above and beyond, and they were so nice and patient. I couldn’t have asked for a better experience.

“It worked out in a strange way,” Mehgan says of the car accident that led her to an innovative thyroid surgery. “In a way I’m glad it happened. As not fun as car accidents are, I’m thankful now.”