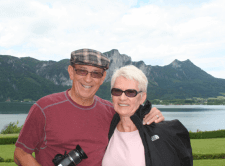 Mary Sellers underwent an operation, radiation and reconstructive surgery for breast cancer – and went home the next day. A few weeks later, she enjoyed a river cruise between Prague and Budapest.

Mary’s whirlwind experience from cancer patient to cancer-free tourist on the Danube was possible thanks to Intraoperative Radiation Therapy (IORT), a cutting edge procedure in which intensive radiation treatment is administered directly to the cancer site during a lumpectomy.

“I was amazed when I heard I was going to be able to take care of everything – removing the tumor, receiving radiation and undergoing reconstruction – essentially all at once and with little downtime. I did not want my diagnosis to interfere with my active lifestyle, including traveling and spending time with my family ,” Mary said.

Four years earlier, Mary’s daughter was diagnosed with breast cancer. After a lumpectomy, Mary’s daughter underwent several weeks of standard radiation therapy at a different hospital that left the fair-skinned woman blistered and pained. Mary was anxious to avoid the same fate.

“The whole procedure took only four hours. They did the lumpectomy and the radiation, and then a plastic surgeon came in and performed reconstructive surgery,” said the Huntington Beach mother of two and grandmother of three. “My daughter was so happy for me. Unfortunately, she’s still waiting to have her reconstruction.”

Mary’s experience was remarkable not only for its speed, but for the compassion and care she said she felt during the entire process.

“The team at Hoag doesn’t just do the procedures. Everybody really helps you through the process, literally holding your hand when you need it, ” she said. “They were committed to making sure I met with everybody, the radiologist, the oncologist, the plastic surgeon right away. I always felt like I was able to get in when I needed to get in.”

Mary is particularly grateful to the Navigational Nurses who help direct cancer patients through their care. When Mary skipped an orientation class for newly diagnosed patients, a navigational nurse called and urged her to reconsider. Mary said she went and found the information reassuring.

“Everyone was very compassionate,” she said. “It makes such a difference.