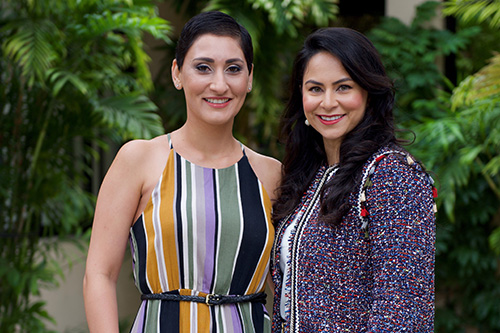 Cancer lingered over her family. Melody Bahu’s grandmother had been diagnosed with breast cancer at age 40, and eight years later she was diagnosed with uterine cancer that eventually took her life at age 49. Her great grandmother was diagnosed with breast cancer in her 80s before she passed away. Then, there was her older sister’s cancer that lead her sister to research genetic testing. Nobody really made the connection and investigated a possible genetic predisposition until she came face to face with such an early diagnosis.

At the young age of 33, Melody’s sister was diagnosed with breast cancer. It is so rare to see breast cancer at this young of an age, so to be proactive, Melody decided to get tested too. She first went to her doctor and was told she had dense breast tissue and did not need a mammogram. Dissatisfied, Melody decided to be her own health advocate and requested a mammogram and genetic testing. Her results showed a large, aggressive form of breast cancer that had already spread and an ATM genetic mutation.

This news would be devastating to any woman, but to be 31-years-old and to have your sister going through the same disease was heart wrenching. Despite the news, Melody knew she needed to be strong and supportive of her sister who was in active treatment for her breast cancer.

“We were never educated on genetics. We just thought our grandmothers got cancer because they smoked,” Melody said. “We all maintain healthy lifestyles and we didn’t think it would happen to us.”

When Melody dove into research about her genetic background, she discovered valuable information about her particular type of breast cancer, both the HER2 and ATM genetic mutations, the cancer that affected her sister and the risk factors for their four other siblings. Educating herself, she was able to emotionally support her sister through her chemotherapy treatments while undergoing her own at the same time.

“You can eliminate the fear of the unknown by preparing yourself for 80% of everything you come across in life by educating yourself, having the right medical team and being aware of the 20% you aren’t prepared for” Melody said, she coined it “The 80/20 Rule.” “Combine that with my faith, family and friends, I had a recipe for success.”

To make sure she was adequately educated, Melody needed a breast center that she could trust. She called Hoag.

“I wanted a second opinion, and a good friend recommended Hoag had a great program,” she said. “Breast surgeon, Dr. Sadia Khan, walked me through every step of the process from the diagnostic work up, to testing with genetic counselors and discussing my surgical options. I love the way she was able to take the medical terms and make them understandable through analogies. She has such positive energy and made me feel more comfortable through this difficult process.”

Similarly, medical oncologist, Louis Vandermolen, M.D., explained all of Melody’s options to her thoroughly and in terms she and her parents could comprehend. Dr. Vandermolen explained to her that she would need chemotherapy for her aggressive cancer, which would cause her to lose her hair and encounter other side effects.

“He spoke my language, and I liked the fact that he and Dr. Khan worked closely together and that the treatment plans were aligned,” she said.

“They related to me on a human level,” she said. “Dr. Khan especially is somebody I not only trust, but I connected with.”

Her doctors both recommended egg preservation since Melody was still young with a desire to one day have children. Women who undergo chemotherapy have a 40% risk of becoming infertile. She was able to undergo a successful round prior to starting her breast cancer treatment. “I am so thankful that I had the chance to plan for my future and have the peace of mind that once I was healed, I could have a normal life.”

After completing months of chemotherapy, Melody underwent a double mastectomy followed by 28 rounds of radiation and is now officially cured from breast cancer. She has three immunotherapy treatments left, one final reconstruction surgery by plastic surgeon Dr. Nirav Savaila and will be on hormone blocking medication for the next five years. Even so, Melody still has a smile on her face and gratitude for catching her cancer early enough to be cured.

She can see past her own journey and looks forward to helping others and encouraging them to educate themselves about their risk and genetic predisposition to cancer and about preventative breast health. Melody is actively involved with the Hoag Healing Breast Cancer Survivors Program and has volunteered to be a patient ambassador to speak with newly diagnosed breast cancer patients. She is encouraging all women to advocate for their own health, including her four other siblings who also completed genetic testing.

“I think I have an interesting perspective because of my experience with my family members who have been touched by cancer – my grandmothers and my sister – and then having a personal diagnosis and journey myself,” she said. “My goal now is to give back as an advocate and hopefully empower others to be advocates for themselves and for those around them.”