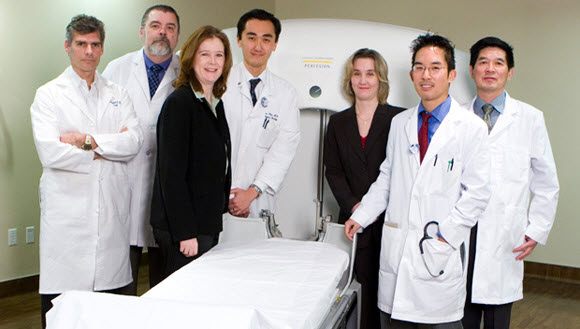 ​Amy Osborn did not realize how much her health issues had affected her life. But a month after being seen by renowned epileptologist David Millett, M.D., she got an inkling.

“My husband hugged me and said, ‘I have my wife back,’” says Osborn, 38, of Newport Beach.

The high-powered media executive suffered a brain tumor in 2009 that she thought would be the worst thing to happen to her. While on a business trip to Cleveland, she woke up alone in a conference room in a pool of blood. She thinks she hit her head on a marble table, but doesn’t know how. A medical team at the Cleveland Clinic put 18 stitches in her head and assessed her before she returned to Orange County.

“They said, ‘You need to go right to the Hoag Neurosciences Institute and see a brain doctor,’” Osborn says.

Instead, she flew home and threw a bridal shower for a friend.

Christopher Duma, M.D., FACS, a neurosurgeon at Hoag’s Neurosciences Institute, found a 3-centimeter tumor in Osborn’s brain. The size of the tumor qualified Osborn for Gamma Knife radiation therapy, a noninvasive method for targeting brain tumors. She underwent the procedure, and the tumor was destroyed.

But over the next few years, she began to experience other problems. Moodiness. Anxiety. She’d either be talking a mile a minute or she would be unable to get out of bed. As a working mother of a toddler, Osborn attributed her ups and downs to the rigors of life; then one day, Osborn was folding clothes by herself in the upstairs room of her mother’s home in Arizona, when she suddenly found herself on the floor, her worried husband kneeling next to her, telling her she was working too hard and not taking good enough care of herself.

She had suffered a grand mal seizure that lasted more than three minutes. She didn’t realize it was happening or remember any of it afterward.

“If I didn’t see the foam saliva all over my husband’s black T-shirt, I would not have believed him,” she said.

After a few attempts at finding the right medications to treat her, Dr. Duma suggested Osborn see Dr. Millett.

“He completely straightened me out,” Osborn says. “It was like a miracle.”

Dr. Millett has an expert knowledge of anticonvulsants or anti-seizure medications and the impact these can have on the brain. He understands the interplay between psychology and neuroscience. He is mindful of the necessity of picking the right medication for the right patient. But most importantly, according to his patients, he knows when to say, “I don’t know.”

“That is my favorite thing about him,” Osborn says. “You don’t get that from a lot of doctors. I don’t want to be given a line. I want a doctor who will say, ‘I’m stumped, but I’m going to keep working on it.’”

And Dr. Millett is indeed working. He had Osborn spend three nights at the Hoag Neurosciences Institute’s Epilepsy Monitoring Unit (EMU), a safe in-patient area where patients stay while being monitored for epileptic activity. There he found that Osborn’s epileptic activity was coming from the left side of her brain – the opposite side from where the tumor had been. This means the tumor is likely not the cause of the epilepsy, and that what is causing it remains a mystery.

“I asked him point blank, ‘Am I epileptic?’” Osborn says. “He said, ‘The short answer, is yes.’ That was a shock, but the fact that it can be treated so easily with medication, that takes the fear out of it.”

“Plus, once you have had a brain tumor there is not a lot that can freak you out,” she says.

By most measures, Osborn is the picture of health. Slim, athletic, an avid marathon runner. Now she’s trying to maintain a healthy attitude, too. Having Dr. Millett and the entire multidisciplinary team of the Hoag Neurosciences Institute on her side is a big part of that.

“I feel I don’t need to worry about it because I know I’m in good hands,” she says. “Dr. Millett is such a detail guy, as long as he’s in the picture, I feel safe.”

Still, Osborn says she thought epilepsy was something you were born with; she didn’t realize it was something you could develop later in life, due to other diseases or brain trauma, and she is adjusting to this new diagnosis.

Now that she knows she has epilepsy, she has been reviewing the past few years of her life from a new perspective: The time she hit her head in Cleveland was likely her first seizure. Her years of fatigue were probably due to sleep deprivation – the epilepsy was likely keeping her from drifting into deep sleep.

At the lowest point in her journey, the 100-pound Osborn had dropped to 86 pounds. Her anxiety disorder was exacerbated, and she was taking as many as 9 different medications. Now she is sleeping well, she’s down to two pills – and they seem to be working.

A month after first seeing Dr. Millett, Osborn says she woke up for the first time in years feeling refreshed and invigorated. Her anxiety quelled, her mind clear.

“It was the first day that I was up and functional,” she says. “I finally feel like myself.”