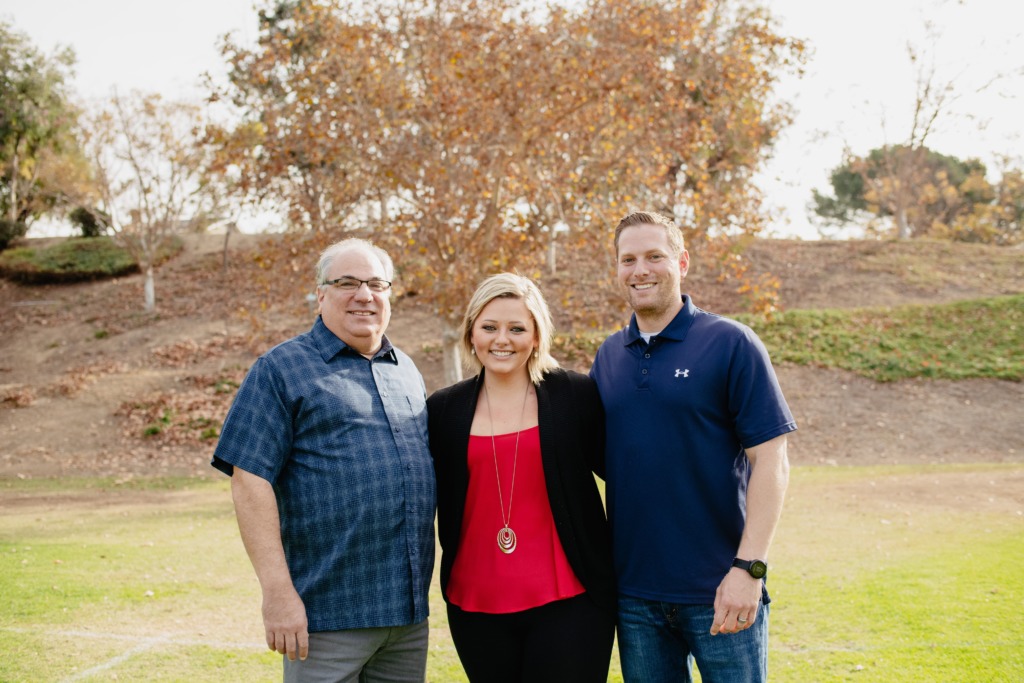 Amy Rosenberg credits two things with saving her life and preserving her father’s health: Hoag Hospital and a medication that caused sore breasts.

Amy had been on a medication that was causing her breasts to be tender, which one day led her to noticing a lump in her right breast. At first the 27-year-old ER nurse at Hoag wasn’t worried. She was young and otherwise healthy. She figured the lump was likely a fibrous mass or a clogged duct. Still, it was large, and it wasn’t going away, so she made an appointment with her OB-GYN Brooke Hargrove, M.D., who decided to order a breast ultrasound.

“I made the mistake of looking over during the ultrasound, and I could see it looked like a big cloud with undefined borders. I’m not a radiologist or an ultrasound tech, but I thought, ‘Oh. I don’t know about this,’” she said. “Then the tech started taking images of my armpit, and all of a sudden, it got scary.”

Still, Amy couldn’t believe it could be cancer.

Soon enough, Breast Surgical Nurse Navigator Lisa Fassnacht, R.N., C.R.N., C.N-B.N., stepped in and took care of everything. Hoag is one of the few hospitals with a nurse navigator program that moves patients through scheduling, insurance approvals and all the other small details that can stand between a patient and the care she needs. Lisa stepped in and scheduled everything. She helped arrange time off from the ER and kept Dr. Hargrove in the loop.

“The nurse navigators are a godsend,” Amy said.

Throughout Amy’s cancer treatment and survival, she said the people and programs at Hoag took much of the difficulty and fear out of the experience.

“The whole team at Hoag Family Cancer Institute, most especially the nurse navigators, blew my mind,” she said. “Everyone was incredible. They truly care. I have felt so connected to every one of my doctors.”

When Amy expressed an interest in freezing her eggs to preserve her fertility, her nurse navigator arranged the appointment. Louis Vandermolen, M.D., Hoag Family Cancer Institute Oncologist, Program Director of Hoag Medical Oncology and professor of clinical medicine at Keck School of Medicine of USC, worked with the fertility doctors to delay her cancer treatments long enough to allow for egg retrieval.

When coverage for a medication was denied, Amy sent an email to the nurse navigator who told her that Dr. Vandermolen’s office was already on it. Similarly, when breast surgeon Heather Macdonald, M.D., recommended post-mastectomy reconstructive surgery, it was Hoag – not Amy – who fought with the insurance company to cover the then-out-of-network plastic surgeon.

Amy’s cancer was aggressive but hadn’t spread beyond her breast. She underwent 16 rounds of chemotherapy until the cancer was small enough for Dr. Macdonald to remove it surgically.

Radiation treatments are difficult, but the fact that Hoag also offers an Irvine facility, in addition to Newport Beach, made the process more convenient for Amy, who lives in Yorba Linda. And while treatments were far from fun, the staff at Hoag Cancer Center Irvine made her feel welcomed and cared for.

“The front desk registration team knew my name and were always so nice to me. It’s amazing how big of a difference it makes,” she said. “When I finished treatment on July 11, they gave me a diploma and little goodies. It meant so much more to me than my college diploma.”

Amy said it was clear from the outset that they didn’t just care about her but about her whole family. As part of Hoag’s cancer program, patients are offered genetic counseling and screening. Genetic tests found that Amy’s cancer was caused by a BRCA mutation.

BRCA1 and BRCA2 mutations are hereditary and linked to increased risk in breast, ovarian, melanoma and pancreatic cancer. Hoag’s Hereditary Cancer Program offers counseling and screening to all members of a person’s immediate family when a genetic cancer risk is found.

Amy’s father and brother were found to have the same genetic mutation. Given his age, Amy’s dad was enrolled in the Anita Erickson Pancreatic Cancer Early Detection Program – a program that monitors people who are at increased genetic risk for pancreatic cancer.

Immediately, doctors found a small neuroendocrine tumor on his pancreas.

The five-year survival rate for pancreatic neuroendocrine cancers is approximately 40% but if diagnosed early and removed, the prognosis is much improved. The fact that Hoag offered to enroll Amy’s father in the monitoring program, she said, likely saved his life.

Amy’s gratitude for Hoag’s programs and people has certainly strengthened during this journey, but it is something she said she always had. In fact, when she decided to move back to Orange County from Los Angeles, the ER nurse fielded job offers from several hospitals. Hoag was an easy choice.

“You want to work at a place where you’d want to be treated. I always knew I wanted to be at Hoag,” she said. “I knew if I ever needed to be treated for something it would be at Hoag. That guided my decision.”