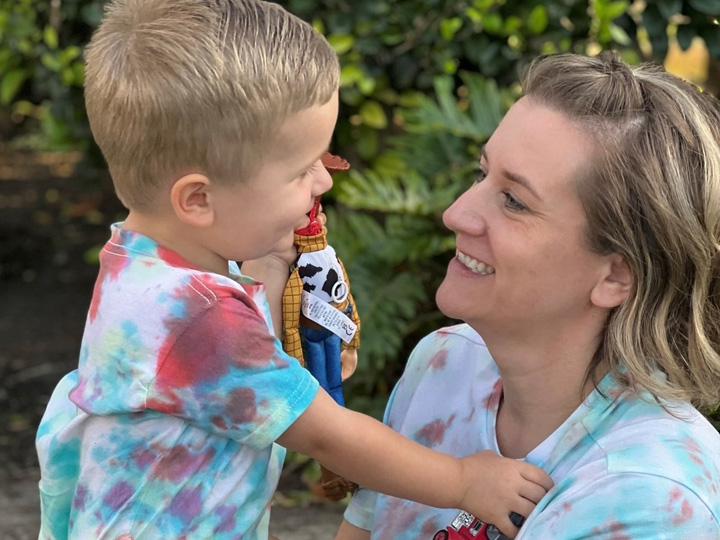 Tamra Rose says she was overweight most of her adult life. But when her son turned a year and a half, and the scale tipped passed her delivery weight, Tamra had enough.

She works at Hoag and had learned from a colleague that the hospital was opening a Bariatric Surgery Weight Loss Program. She had thought about weight-loss surgery in the past, but no program seemed the right fit for her. With the trusted name of Hoag, however, she was eager to learn more. Tamra quickly became one of the first in line.

“I had tried different diets, Weight Watchers, joining a gym,” she said. “I could only lose so much. Having a young son, I didn’t want him to ever feel embarrassed of me because of my weight. I needed additional tools to help me – not just to lose the weight but to learn healthier habits that I could pass along to my family.”

On August 11, 2021, Tamra underwent gastric sleeve surgery at Hoag. Within a year, she had lost 91 pounds and saw improvements to her blood sugar level and liver functions. Today, she is on the road not only to a thinner self, but a healthier one for a lifetime.

“I was borderline diabetic and my liver functions were so high that they wanted me to do a hepatitis panel,” she said of her medical condition before surgery. “I thought, ‘This is not OK.’”

Surgery is a serious step, and Tamra advises anyone considering it to do their research and choose a program like Hoag’s that offers comprehensive care – both before and after surgery. She especially appreciated working with neuropsychologist Lauren Bennett, Ph.D., who assesses patients’ underlying issues and likelihood of long-term success.

“I would be so leery of any program that doesn’t make you get psychiatric clearance first. This surgery will truly change your life, but you need to start from the top down,” Tamra says.

Then there’s the education component, learning what to look for on food labels to avoid hidden sugars and other pitfalls. And, Tamra says, the full medical workup with specialists like David T. Ahn, M.D., program director of the Mary & Dick Allen Diabetes Center, gave her – and bariatric surgeon Adrian B. Dobrowolsky, M.D. – the confidence to move forward with the surgery.

“Dr. D [Dobrowolsky] is amazing. I felt very comfortable from the first visit,” Tamra says. “He explains things in a very real way. For me, it was also a plus that he is younger because I felt like he could relate. He was straightforward and presented everything up front. I didn’t have any questions left after my consult with him.”

Tamra recovered quickly, without any notable side effects or issues: “I have been an ideal patient,” she says. So ideal, that she’s now a colleague. Tamra joined Hoag’s Digestive Health Institute as a metabolic and bariatric surgery clinical reviewer.

In her current role, Tamra has even greater insight into the program’s comprehensiveness – the way it ties together primary care, endocrinology, psychology, dieticians and other care to benefit patients’ post-surgery experiences.

“Because you’re getting whole care through Hoag, all the doctors and specialists can see your labs and charts. You’re not having to carry things around,” she says.

That’s not to say navigating life with a gastric sleeve is always easy. Tamra is learning how to confront real-world situations – like going to Disneyland with a churro-loving toddler. For that, Tamra says, Hoag’s support group has been instrumental to her journey.

“Those are the people going through the same things. They understand how you feel on a totally different level. Everyone is so encouraging, and no one is negative,” she says. “If you’re struggling, you can ask the support group for tips.”

But the best thing about Hoag’s program? The fact that it works.

“I can now go down the slide with my son. I can chase after him. I feel like my family has learned some healthier habits,” Tamra says. “Now, when I wrap my arms around my husband or son, they can wrap their arms around me. And that’s the best feeling in the world!”