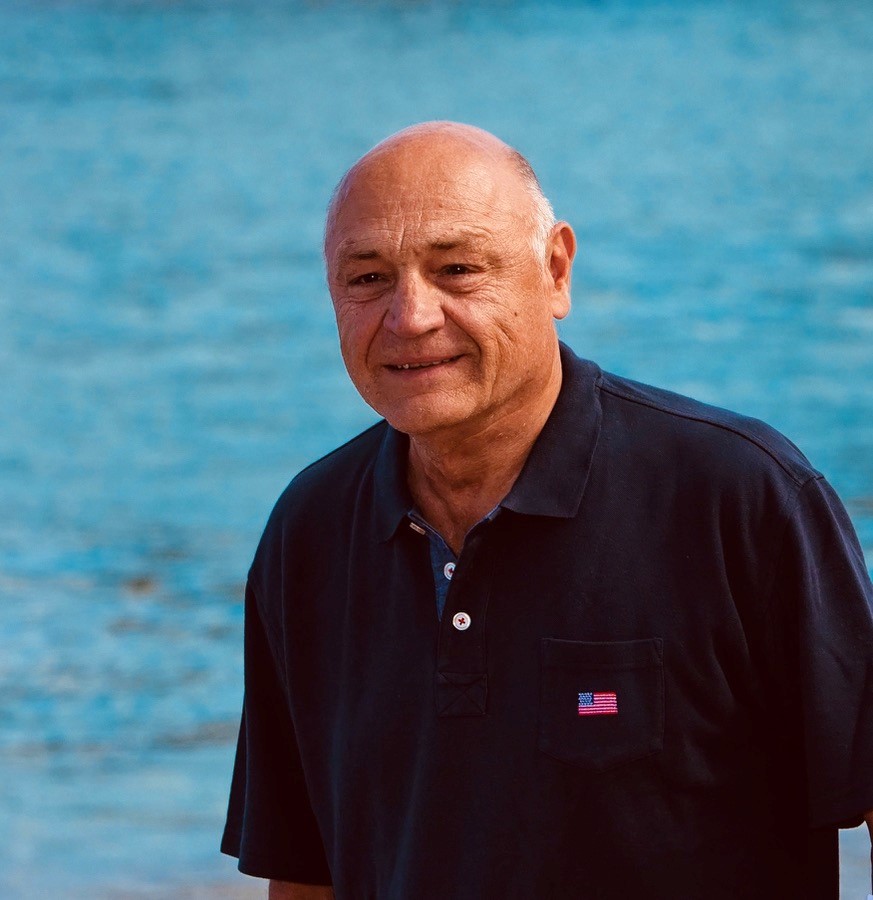 Bill Coppock can stand up straight and look a person right in the eyes. It’s a small gesture, one most people don’t think twice about. But after a back surgery two years ago to correct nerve compression and pain, Coppock had been unable to manage it.

Now, thanks to the expertise and innovative skills of Pawel Jankowski, M.D., Coppock looks and feels like himself again.

“I went from a bent-over old man to standing up straight like an old Marine,” said Coppock, 73.

“I feel good and confident. I know I’m healed and repaired.”

A few car accidents and a life of extreme sports, including collegiate and high level men’s hockey, left Coppock with a condition known as adult degenerative scoliosis, or, as Coppock calls it “a beat up back.”

He’s undergone a few back surgeries over the years to alleviate pain, but a surgery a few years ago left him with a deformity that caused him to lean forward, as though he were perpetually reaching for something.

“If I laid on my back on the floor, my head would be three to four inches off the ground,” he said. “My muscles from the base of my tailbone all the way to top of my head were bearing the weight of my upper body completely. It was painful, and as the day went on the muscle fatigue increased so I would have severe neck and shoulder pain and lower back pain.”

Coppock wasn’t eager to undergo another surgery, but as the pain intensified, he began researching surgeons who could help.

“I wanted to be affiliated within the Hoag system because I have a strong belief in Hoag being an outstanding facility with outstanding doctors,” said Coppock, who has done volunteer work at the hospital. After asking around, Coppock was referred to Dr. Jankowski.

Fellowship trained at NYU Langone Hospital for Joint Diseases, Dr. Jankowski began his practice only two years ago in the spine program of the Pickup Family Neurosciences Institute – a fact that Coppock appreciated.

“I saw several older doctors who aren’t trained in the newest high-tech surgery. They told me they couldn’t do anything for me. They didn’t want to touch it,” Coppock said. “Then, in walks this confident young man. He showed me exactly what he planned to do, using screen shots from a surgical planning program. I about fell out of the chair.”

Dr. Jankowski gave Coppock the photos of the planned surgery and advised him to seek a second opinion before committing to surgery. Coppock sought four.

“The first two were well-known surgeons who said they understood the surgery, but they could not perform it. It was beyond their skill level,” he said. “The other surgeons told me that what Dr. Jankowski planned was the most modern technique in today’s medical treatment of spine deformity. That’s when I began to realize that I was getting a specialist within a specialty.”

Coppock decided to undergo the 11-hour surgery, which involved sensitive work around his spinal cord, bone cutting and bone grafting.

“It was just incredible, the amount of things they did,” he said. “It was all the newest technologies and techniques.”

Several hours after the surgery, when the anesthesia started to wear off, Coppock stood up.

“I immediately felt brand new. It was like I lost weight,” he said. “The next morning, when I got up and walked, it was an exhilarating experience because I knew I was standing up straight.”

Coppock remained at Hoag for two weeks, healing and undergoing physical and occupational therapy, and rehabilitation in the Fudge Family Acute Rehabilitation Center to regain the strength he had lost after two years of bending forward.

“Two weeks at Hoag, with 24/7 therapy was an absolute masterful process to go through,” he said. “Everyone was professional and terrific.”

As soon as he went home, Coppock was eager to return to his active lifestyle. He has continued his physical and occupational therapy exercises at home and knows he can’t rush into any major activities. But he is grateful that he feels confident and pain-free.

“I’m not going to play hockey or slam around on boats on rough seas, but I am going to enjoy life. I’m going to enjoy my grandkids and hike and whatever challenges I can take on,” he said. “The pain went away 100%. I got a new lease on life.”