Home > Patient Stories > After 72 Years of Seizures, Epilepsy Patient Says Hoag Gave Him His Life Back 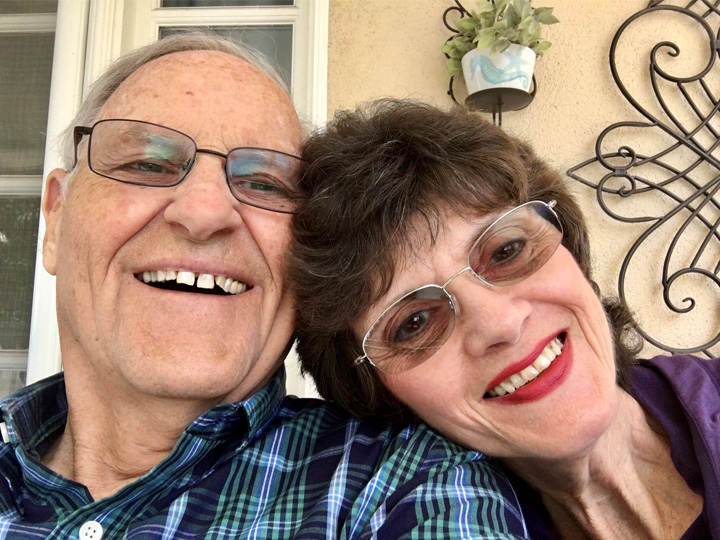 His seizures began at the age of 4. By the time Michael Merritt was 72, his epilepsy became so severe his wife was sure he was going to die. But in 2018, Michael’s doctors referred him to the Epilepsy Program at Hoag’s Pickup Family Neurosciences Institute, where he met Program Director David Millett, M.D., Ph.D. Today, at 76-years-old, Mike is seizure-free.

“We’ve been through a lot over these past many years,” said Diane Merritt of her high school sweetheart and husband of 53 years. “Dr. Millett and his team literally gave Mike his life back. In the course of that, I got my life back too. We’re so grateful.”

Over the decades, the Merritt’s had many ups and downs. Mike underwent epilepsy surgery in 1983 at another hospital, and this was followed by a period of remission that lasted for years. Unfortunately, seizures returned.

The couple managed, and Michael worked despite his seizures. But in January 2018, a few days after Michael’s 72nd birthday, he suffered three grand mal seizures in one night. After that, the seizures got worse and more frequent. By August of that year, Diane said Mike was “circling the drain.”

“On August 14, 2018, he had a status seizure that went on for a solid hour. He stopped breathing in the ambulance. I thought I was going to lose him,” Diane said.

By then, Michael’s doctor at a different hospital referred the couple to Hoag, where Dr. Millett did something for Michael that no other doctor had: He tried something new. He adjusted his medication, prescribed different combinations, spent time with his patient and kept refining his approach.

“Something that really frustrates me is for 40-something years, doctors gave me the same medication,” he said. “I can’t believe that a doctor never took me off my medications to try something else. Dr. Millett did.”

When it was clear that Michael would need more than medicine, Dr. Millett proposed innovative options, including implanting a vagus nerve stimulator (VNS), a device used to treat seizures by sending mild pulses to the brain.

Dr. Millett explained the risks and benefits of the surgery, and together they decided to try VNS at the end of 2018.

The VNS device is not an instantaneous cure. It can take up to a year or two years of adjusting and fine-tuning to get it right. The Merritt’s say that by never giving up on Michael, Dr. Millett and his team put an end to the seizures and improved the couple’s quality of life.

“If you go for a certain period without having a seizure, you can reapply for your driver’s license,” Michael said. “After being seizure-free for 16 months thanks to Dr. Millett, and after being unable to drive for 12 years due to epilepsy, I recently passed my driver’s test and have my license back.”

Now the former “family chauffer,” Diane said she was impressed by the way Dr. Millett took his time with Michael to address the source of his seizures. She has been at Michael’s side since they were teenagers and had never seen a doctor show the level of dedication and compassion that Dr. Millett had for her husband.

“Dr. Millett saved my husband’s life. He came up with the right combination of medicine and the VNS,” she said. “He really cares. We really appreciated that. We’re so thankful for Dr. Millett for hanging in there and getting us to the point where we are today.”