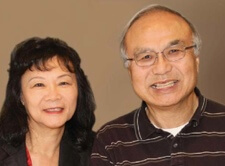 Stroke is the leading cause of long-term disability in adults. The good news is, the faster you seek medical treatment, the better your chance of a full recovery. This was the case for Fountain Valley resident Susie Chew.

Susie, a 62-year-old computer programmer, returned to work on Monday morning after a week-long vacation. Getting back into her morning routine, she decided to walk downstairs to the company cafeteria to get a cup of coffee. As Susie headed down the hall, she suddenly stumbled and fell, but luckily

braced herself against the wall with an elbow. She dropped her empty coffee cup and although she made several attempts to pick it up, she was unable to firmly grasp the handle and the cup continued to fall to the ground.

“At first, I thought I was just being clumsy and maybe a little tired since it was my first day back at work after vacation,” recalls Susie. “My two friends and coworkers, Stephen and Sylvia, were walking down the hall behind me and saw all of this happen.”

Fortunately for Susie, her coworkers were nearby and ran to her aid. They helped her into a chair and offered her a cup of water, but as she took the first sip, water began to spill out from the left side of Susie’s mouth. She also began slurring her words saying, “I’m OK,” but her coworkers knew something was wrong and immediately called 9-1-1.

As the ambulance transported Susie to Hoag, she could hear the paramedics communicating with the hospital staff via their radio. “They were already telling Hoag that I was coming,” says Susie. “The nurses and doctors were waiting for me when I arrived.”

One of those people waiting for Susie was Andrew Ly, M.D., neurohospitalist and Hoag Stroke Program team member. Dr. Ly immediately assessed Susie and inquired about her symptoms. “I was tired, a little dizzy and I had a mild headache,” continues Susie. “But I didn’t know I was having a stroke.”

Dr. Ly ordered CT scans to evaluate Susie’s brain and blood vessels, which revealed she had a large clot in one of her main arteries and was indeed having a stroke. She then received the clot-dissolving medication tPA (tissue plasminogen activator) intravenously. Susie responded extremely well to the treatment and was discharged home just three days after arriving in the emergency room.

If Susie had not received immediate treatment, her outcome could have resulted in severe disability, or worse. The fact that Susie arrived at Hoag immediately after the onset of her symptoms made her an ideal candidate to receive the most effective stroke management. She is now back at home with her family and expected to make a full recovery.

Susie and her husband, Alan, have three children and two grandchildren, ages two and three. The entire Chew family, especially Susie, remains grateful to Hoag and the stroke team. “I’m very thankful for the wonderful staff and physicians at Hoag. I was treated extremely well and everyone seemed genuinely concerned about my well being.” ​