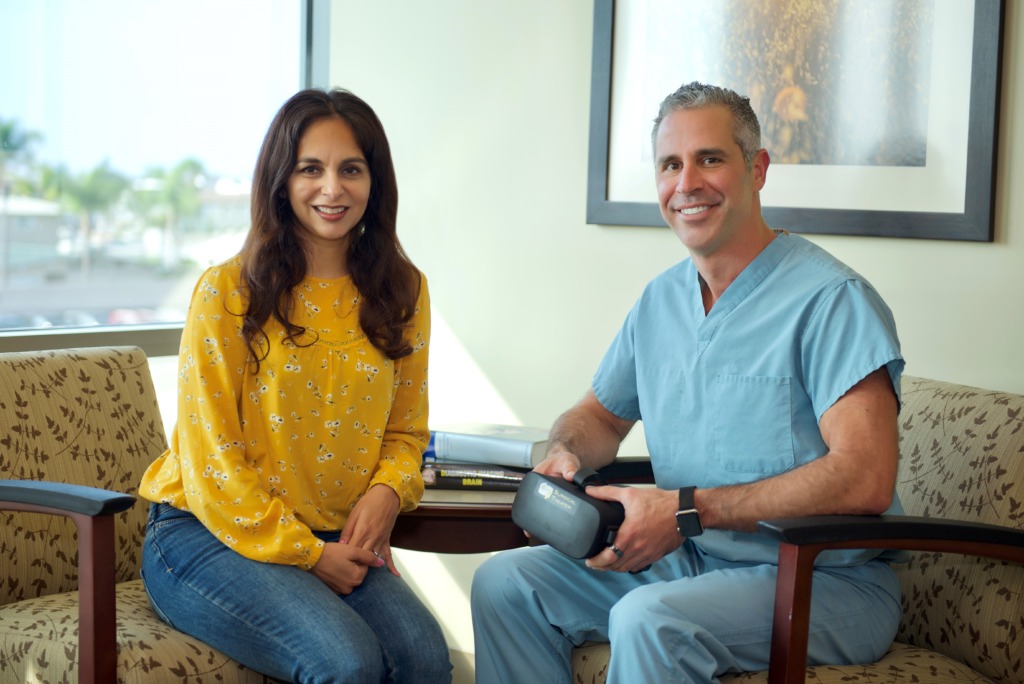 Meera Sawhney got up from the restaurant table and knew something was wrong. Her family had gathered for her daughter’s 13th birthday. but an all too familiar feeling struck her again. Was it anxiety, or a panic attack? She needed to splash some cold water on her face.

In the bathroom mirror, a reflection of the next scene glimmered back.

A Hoag ER doctor conducted brain scans to look for injury. This led to the discovery of a baseball-sized tumor in Meera’s brain. The years of fainting, of anxiety, of issues that the health-conscious Meera could never explain, suddenly became clear.

What became even clearer, Meera said, was what Hoag could do about it that no other hospital in the area can.

Hoag is one of the few hospitals in the country to use the Precision Virtual Reality® medical visualization platform by Surgical Theater. Combining fighter jet flight simulation technology with medical imaging scans such as MRI and CT, the technology creates a 360-degree virtual reality reconstruction of a patient’s brain. Tumor and all.

This 360 VR view allows Hoag’s neurosurgeons to “rehearse” their approach to the surgical target. Just as importantly, it provides patients like Meera with a complete understanding of what is wrong and what can be fixed.

When Robert Louis, M.D., the Empower360 Endowed Chair in Skull Base and Minimally Invasive Neurosurgery and program advisor of the Skull Base and Pituitary Program at the Pickup Family Neurosciences Institute at Hoag, took Meera on a “tour” of her brain, he 3D graphically reproduced the approach to removal of her tumor, a meningioma.

“I was surprised to see how large the tumor was,” she said. “It made me understand what it was that he was going to have to conquer. The way he explained it was excellent. He put me at ease.”

Dr. Louis is one of the few neurosurgeons in the nation trained on this technology.

“Because we’ve done the rehearsal, when we go in to do the surgery, it feels like déjà vu,” Dr. Louis said. “I’ve been here before. I know where the important structures are.”

Brain surgery is inherently risky. Dr. Louis explained all the possible risks with Meera, including loss of speech, loss of mobility and seizures. But because he was also able to “show” her the procedure before performing it, Meera said she approached the day of surgery with a sense of calm and trust.

“I honestly feel so fortunate. I feel like he saved my life,” she said.

When Meera awoke in recovery, she was greatly relieved to be entirely intact. A nurse checked her speech and function every two hours.

“They did such a wonderful job. The nurses, the doctors, they all followed up with me,” she said.

After three days in the hospital, Meera went home. She has returned to work part-time and has been given the green light to exercise. At her three-month appointment, Dr. Louis told Meera her tumor was not coming back.

“He said, ‘You’re on a good path,’” she said. “I feel so much better. I used to get anxiety in large groups. I feel fine now. It’s amazing what a difference it is to have this tumor removed from my head.”

Just as the VR model helped show Meera a solution to her brain tumor, this entire experience has served an important “visual” for Meera’s daughter.

“My daughter sees me as this strong person. This has made us see that we’re not invincible,” she said. “It taught us all a lesson about how precious life i