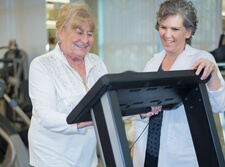 “Conservative therapy is your best option at this time.”

That’s what doctors told Barbara Dahl, 82, when the pain in her legs got so bad she could no longer walk more than 30 feet. Peripheral Arterial Disease (PAD) had blocked the arteries in her right leg so completely. She had successful procedures in the past and stents helped her seven years ago but now with the recurrence of her problem an additional form of therapy was recommended by her treating physicians.

“I had to stop walking because it burned so bad,” Dahl said. “I was sick to death, because I’m an active person, and I couldn’t even do a Costco run. I hoped they would say I could have a bypass, but my doctors recommended a conservative approach. She was hoping that she can get a bit of circulation to ease her pain and her fear of an amputation.’”

Medical Director of the Hoag Vascular Services Program at the Jeffrey M. Carlton Heart & Vascular Institute, Dr. Mady designed the PAD Supervised Walking Exercise Program, an evidence-based and unparalleled program for Orange County patients who are living with the pain and suffering of PAD.

Its design is elegant, and so far, its results are amazing.

“After just three months, I can go to Costco and walk up every aisle. I walked the whole place twice without sitting down,” said Dahl, who underwent an angioplasty on her legs 15 years ago. “Sometimes I feel like a gazelle.”

The program involves intensive physical therapy under the direct care of a medical team three times a week for six months. Mady explained to Dahl that supervised exercise is the only intervention that can positively impact all the aspects of PAD; ease physical pain, reduce the risk of cardiovascular events and reduce risk of amputation. He told her, “I want you alive, and I want you alive with both legs.”

“I said I would try anything,” Dahl said.

Dahl explained that for patients like her simply saying “walk more” isn’t enough. Having nurses there to monitor her progress, keep track of her vital signs and encourage her when to stop and when to keep going is invaluable. It also helps ease the nagging fear that patients with PAD live with daily.

“I was afraid that if my arteries are so clogged, what if a blood clot breaks loose and I get into trouble while I’m walking on my own?” Dahl said. “So I feel comfortable with the nurses there.”

That said, Dahl, who lives five minutes away from the hospital in Newport Beach hopes that maybe one day she’ll be well enough to walk to the program from home. In the meantime, she’s remaining dedicated to the walking program – and evangelical when it comes to walking.

In fact, between every child, grandchild and great-grandchild in her family, Dahl’s Christmas list totals 36 people. This year, in a testament to how much she believes in the power of walking, she bought everyone on her list walking shoes.